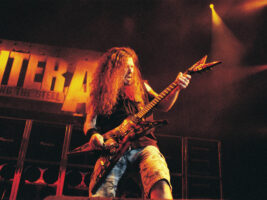 The venue in which Pantera guitarist Dimebag Darrell was murdered has been demolished, months after it announced it was closing its doors for good.
Dimebag Darrell, real name Darrell Abbot, was the main target of a mass shooting that took place on 8 December 2004 at the Alrosa Villa in Columbus Ohio. The shooting took place during a Damageplan concert, the band Darrell formed alongside his brother Vinnie Paul following Pantera’s disbandment. Three others were killed and three more injured in the shooting. The perpetrator, ex-US Marine Nathan Gale, was shot and killed by police officer James Niggemeyer.
The venue had been active for 45 years upon its demolition, and over this time it saw a wide range of musical acts perform: David Byrne, Slipknot, Dio, Dream Theater and more. However, the 2004 shooting would forever be a part of its legacy. Vinnie Paul would later sue the Alrosa Villa, claiming that security could have averted the tragedy had they denied Gale entry. The suit was settled out of court in 2007.
The club announced in June of 2021 that it had closed down for good, writing on its Facebook page: “We’ve seen stars born here, unfortunately we’ve had stars pass away here, but the one thing that can never be taken away from us is the amazing memories we’ve all created along the way with magical people inside of this magical place.
“I don’t personally like how the media always chose to portray the venue when talking about it because they always chose to drag it down with negativity because of the unfortunate passing of Dimebag Darrell… But that shouldn’t be what defines Alrosa as a music venue. They provided so many people with so many amazing opportunities throughout the years and we are happy to say that a lot of the best musicians in the country got their start right here at the venue on that stage.”
You can see the video of the demolition below. Its description notes that “The Dime Rock,” the site of a makeshift memorial to Darrell, had either been moved or cleaned off. It also claims that the site will now be home to a large affordable housing apartment complex.

The post The venue where Dimebag Darrell was killed has been demolished appeared first on Guitar.com | All Things Guitar.