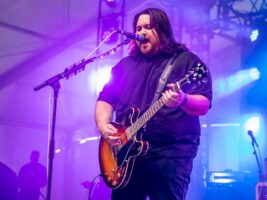 Wolfgang Van Halen has once again dashed hopes for an Eddie Van Halen tribute show, insisting that the relationship between surviving members is too ‘dysfunctional’ for an event to materialise.

Speaking to Classic Rock magazine, Wolfgang has admitted that to him, the possibility of a Van Halen reunion is slim, no thanks to the clashing personalities of the members.
“When it comes to Van Halen and entities surrounding the band it’s unfortunate, certainly compared to Foo Fighters who have their shit together with interpersonal relationships,” Wolfgang said.
“Certain personalities just can’t get over themselves to work collectively for one purpose – that’s been the curse of Van Halen for its entire career. […] Their camp is very dysfunctional – everyone! – hell, it was difficult to make plans even when the band was active.”
In the interview, the Mammoth guitarist also confessed that he has felt a sense of closure when he performed his father’s tracks, Hot For Teacher, Panama and On Fire, at the Taylor Hawkins tributes earlier this year.
“I feel a lot of closure because my part of the show was a tribute to my father,” he explains, referring to his time sharing the stage with Dave Grohl, Josh Freese and Justin Hawkins. “My playing at the Taylor shows delivered that catharsis without the stresses of dealing with the Van Halen camp.”
The guitarist also addressed the comments made by Sammy Hagar to Rolling Stone last week, where the former Van Halen frontman said he would “love” for a reunion to take place.
“He said that, but he also said he wouldn’t,” Wolfgang said. “Sammy said two different things. I feel that I’ve said my piece, and if the Taylor concerts are all that happens then I’m happy with that.”
The post Wolfgang Van Halen suggests that Van Halen members are too “dysfunctional” to organise a tribute appeared first on Guitar.com | All Things Guitar.