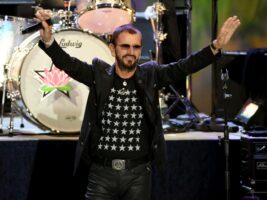 Ringo Starr has confirmed that he’s tested positive for COVID-19 and will be putting his tour with the All-Starrs “on hold”.

Earlier today (4 October), a statement posted to the Beatle’s Instagram page announced the cancellation of Canadian shows planned for October. See the list of cancelled dates below:
October 4 Winnipeg, Manitoba – Canada Life Centre
October 5 Saskatoon, Saskatchewan – Sasktel Centre
October 6 Lethbridge, Alberta – Enmax Centre
October 8 Abbotsford, BC – Abbotsford Centre
October 9 Penticton, BC – South Okanagon Events Centre
According to the statement, Starr is currently recuperating at home. “Ringo hopes to resume [touring] as soon as possible and is recovering at home,” the statement read. “As always, he and the All-Starrs send peace and love to their fans and hope to see them back out on the road soon.”
The post also confirmed that the reason for Starr’s cancellations last week – in New Buffalo, Michigan and Prior Lake, Minnesota – were due to COVID-19.
Per a tour schedule on Starr’s website, the Beatle and his band are due to perform next Tuesday (11 October) in Seattle, Washington. At press time, it appears Starr is planning to go through with that show, as well as succeeding ones in Oregon, California and Mexico.
Earlier this June, Starr postponed his Summer tour dates with the All-Starrs after two members of his band, guitarist Steve Lukather and keyboardist Edgar Winter, tested positive for COVID-19. In a statement issued on his website back on 11 June, the Beatle expressed he was “so sorry to let the fans down”. In the update, the drummer also thanked fans for their patience regarding the delay, saying:
“As we all know, Covid is still here and despite being careful these things happen. I want to thank the fans for their patience, I send you all peace and love, and we can’t wait to be back in the Fall.”