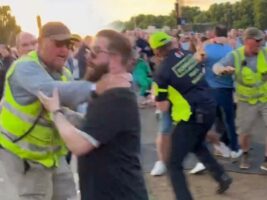 In a beautiful twist of irony, footage has emerged of fans getting into a brawl during a recent Eagles gig at Hyde Park as the band performed the song Take It Easy.

According to a video released by Metro, several concert goers were involved in the scuffle, with two men even rolling on the ground at some point.
A fan in a black Eagles t-shirt was also seen throwing punches at the security guards before being restrained while an angry woman in green was escorted off the premises later on. All while the band onstage were singing merrily to the lines “Lighten up while you still can / Don’t even try to understand / Just find a place to make your stand / And take it easy.”
An astute onlooker who was filming the brawl was also heard telling the fighters, “You’ve got to take it easy.”
Like the band, the rest of the crowd paid no mind to the disruption and continued watching the concert as security tried to manage the situation. The Eagles were playing as headliners during the annual British Summertime Festival, which featured other big names such as Elton John, Pearl Jam, Little Big Town, the Rolling Stones, and Duran Duran.
The fight reportedly occurred within the Diamond VIP section of the concert, where prices for the tickets begin at £399 or $485. Per the venue’s website, amenities include a “dedicated premium standing viewing area in front of the stage with unrivalled views of all the Great Oak Stage performances,” and of course… a private bar.
Check out the video below.

The post “You’ve got to take it easy,” onlooker tells brawlers at Eagles concert fighting during Take It Easy appeared first on Guitar.com | All Things Guitar.