Pulled out the pcb and put in 500k pots (SD “Smooth Turning”, if you’re curious).

I’ve actually only wired up the neck pickup so far, but when I went to check my work by plugging in and testing for signal, it devolved into over half an hour of noodling and wankery because HOLY CRAP YES.

Honeymoon period, to be sure, but really liking what I’m hearing so far. I can still get the 250k sounds by rolling down (to my ears about a third down, not half, but I don’t remember enough about the specifics of logarithmic pots to say for certain) the tone knob, but now have access to honest-to-fictional-deity chime. And for someone whose tastes and style were irreparably formed by various jangle-pop bands, that’s important.

I’m very curious to see if this cures the all-3-pickups setting of its “Strat with a head cold” problem. Will report back. 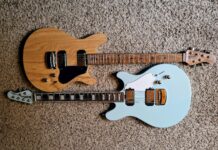