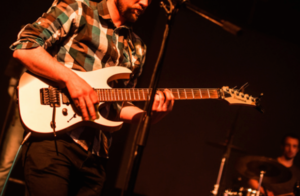 10 Beginner Guitar Songs That Are Easy and Fun to Play

The idea of beginner guitar songs can often seem extremely limited. Unfortunately there are a lot of places where you’ll see lists of easy songs that don’t give you much variety. In fact, a beginner guitar song is often dreadfully boring to play, which doesn’t do much for inspiration or for pushing an aspiring guitarist to continue learning.

The idea of beginner guitar songs can often seem extremely limited. Unfortunately there are a lot of places where you’ll see lists of easy songs that don’t give you much variety. In fact, a beginner guitar song is often dreadfully boring to play, which doesn’t do much for inspiration or for pushing an aspiring guitarist to continue learning.

But the truth is, many of the songs you’ve heard (and know) are actually quite easy to play. Qnd some are more interesting than others. But how do we know they’re easy? If you focus on just the chord progressions for each song, what you play on the guitar can become as simple or as difficult as you want.

It’s often a matter of placing only a few chords. This means that most of the songs you’re used to hearing are probably much easier than they sound. In other words, you can learn them.Our List of Songs

So we’ve come up with a list of beginner guitar songs that are easy but interesting and fun to play. They’re also songs that, initially, might be a little intimidating. Rest assured, they’re easier than they sound. If you’re just starting out—looking to expand your song vocabulary—this is the place to do it.

Here’s the process we’re using to set these songs up for you:

Try not to be overwhelmed by what you hear when you listen to the track. Instead, simply recognize that all you need to worry about is the chord progression. Think about those chords, memorize them and listen for the changes in the song. This process will help to train your ear and improve your ability to recognize chords and change chords quickly within a piece of music. Otherwise, it’s just a great opportunity to learn some new music.

Let’s get started.1. “Lay ‘em Down” by Needtobreathe

Though it’s played in an alternate tuning (open C) “Lay ‘em Down” can be in standard tuning with a basic lyric and chord sheet, which we’ve linked to above. The song’s pace is slow and bluesy, giving you plenty of time to get used to the chord changes.

Watch for the Am thrown into the “We’re all dirty like corrupted small towns…” line.2. “Folsom Prison Blues” cover by Everlast

To be honest, you can play the Johnny Cash or Everlast version of this song, all the same. In both cases you’ll be playing in the key of E—the same chord progression. The Everlast rendition is just a lot more fun to play along with, so that’s what we’ve linked to in the video.

Think 12-bar blues while you’re following the progression. It’s a bit fast, but with only a few chord changes. You should have no trouble keeping up.3. “Doesn’t Remind Me” by Audioslave

Almost the entirety of this song hinges on E, A and D, with the verses being just E and A. The bridge diverts from this pattern as you’ll see in the chord sheet, though it’s still easy to pick up if you want to learn the entire song. Now, as far as the solo goes, all bets are off.

Tom Morello is a machine of a guitar player, so we recommend holding off on the solo until you feel really comfy with the rest of the tune.4. “Born Free” by Kid Rock

Though you’ll find an F#m in the chord sheet, this song is almost entirely made up of E and A. In the bridge you’ll need to place a D and Db, but the chord sheet makes it pretty easy. This song is ideal for an acoustic or electric guitar cover.

Though the lengthy progression might feel a bit intimidating, I’d encourage you to look at the chord sheet and give it a try. Because you’re only dealing with four chords.

The only tricky part is to hear the chord changes, which can be easily identified by the piano chords that come down at each change. You might also recognize this song from the House TV intro or the Assassin’s Creed video game soundtracks.

Nickelback’s 2007 hit is made up mostly of four chords, with only G, C and F used during the verses and the Am thrown in for each chorus. It’s a fun listen and you’ve got to appreciate the diversity in the music video. The pace of this song is slow, which will give you plenty of time to get your chord changes in.

It’s one of the more difficult songs in this list, simply because of the higher number of chord changes and the faster pace. If you’re having trouble keeping up, just go with one section of the song at a time, working through the verse, chorus and bridge. If you can get comfortable with the pace, the chord changes are well-defined and easy to identify.

The actual key is Bb and is a bit tricky for beginners. I prefer to use capo-three and play the song in C, which is what I’ve linked to above. It sounds the same and is significantly easier.

9. “Lightning Crashes” by LiveKey: DChord Progression: D – A – E (capo 2)Chord Sheet
Note that the chord sheet is written for a capo 2, if you want to play along with the track. If not, feel free to drop the capo and just play the song with these open chords.

10. “Pumped Up Kicks” by Foster the PeopleKey: Dm

Chord Progression: Dm – F – C – GChord Sheet
The entire song is Dm, F, C and G, in that order. You’ll hear the bass line as the most pronounced element of the song, but if you strum the chords along with the chord sheet, you’ll hear the changes more distinctly.

If you get through all these and you’d still like to learn more songs (I applaud this decision), here are a few resources you can access to do so:1. Guitar Tricks Beginner Songs Database
2. Ultimate List of Beginner Guitar Songs
3. Guitar Habits List of 30 Beginner SongsThere are enough songs to keep you busy for a long time. So it should be clear that even if you’re a beginner, you don’t need to be bored with your instrument. In fact, that’s one of the worst things that can happen to you in the early stages of your guitar playing.Because a bored musician doesn’t get better and they usually don’t hold an interest in their instrument.My encouragement to you is to use these songs to stoke your interest in the guitar. Find stuff you like and play it as a way to motivate yourself to continue learning and becoming a better player. I’ve always been of the opinion that there’s no better way to learn something aside from digging in and doing it.Take these songs as opportunities to dig in and get your hands dirty.

Guitartricks.com is an online subscription service that has provided online video guitar lessons since 1998. The site has more than 11,000 video lessons with 600-plus song tutorials and more than 2 million members. With an unending appetite for improvement, via ongoing course production and licensing negotiations, the site continues to expand and progress.