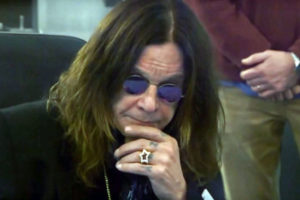 Ozzy Osbourne recently heard the raw, unmixed master tape of his hit song “Crazy Train” for the first time since he recorded it on March 22, 1980.

Ozzy Osbourne recently heard the raw, unmixed master tape of his hit song “Crazy Train” for the first time since he recorded it on March 22, 1980. And by all appearances, it was an emotional moment for the heavy metal legend.

The occasion was captured on an episode of Ozzy and Jack’s World Detour, the History TV show featuring Osbourne and his son.

Osbourne became visibly moved as he listened to the guitar work of Randy Rhoads, the young virtuoso guitarist who cowrote the song with him. Rhoads served as Osbourne’s guitarist from 1979 to 1982, during which time they recorded the first two albums of the singer’s solo career: Blizzard of Ozz and Diary of a Madman. Rhoads died on the Diary of a Madman tour when a small aircraft in which he was a passenger crashed during an early morning joyride on March 19, 1982.

“Randy Rhoads was a big part of my life, and he still is to a certain degree,” Osbourne says in the clip. “I’m always thinking about him.”

During the listening session, the studio engineers isolate Rhoads’ guitar solo, allowing Osbourne—and the rest of us—to hear his guitar work in all its glory.

“It’s bittersweet,” Ozzy says of hearing the tape. “Randy Rhoads died not long after that. It’s kind of like going back to a good time but yet a really horrible time at the same time. I only wish he could be around a little bit longer.”

Warbringer: "We’re not walking on eggshells, as far as the riffs we write. We don't go, 'It’s gotta be thrash!'"