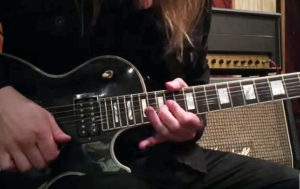 A Guide to Rolling Shred Patterns

In this addition of Secrets of Shred, I’m going to show you a unique way of shifting positions by rolling across the frets on adjacent strings.

Using this technique creates a very fluid sound when played fast. I’m going to show you the three simple shapes you need to get up and down the neck and then string them together in the later examples.

Let’s start with EXAMPLE 1 in the key of B minor!

EXAMPLE 1 is a diatonic shape in the 7th position. I start with an upstroke on the high E string and then roll with my third finger to the B string and pick the same fret with a down stroke. I then use a hammer on and pull off to create the legato effect that is essential to play these examples fast. The picking pattern is the same for all the shapes in this lesson, so make sure you get it down before moving on to later examples. It might feel awkward at first for your left hand, but I assure you that once you get used to this pattern, it’s a great trick to be able to pull out in a solo.

For EXAMPLE 2, we use the same approach as EXAMPLE 1, just shifted up a position. Make sure to use the same picking pattern and once again, roll with your third finger. Keep it as consistent as possible.

EXAMPLE 3 is the final shape you need to get all the way up and down the neck in any major of minor key. Once again, use the same picking pattern as our previous examples, but this time roll with your second finger on the 15th fret.

Moving on to EXAMPLE 4, I take the three shapes from our previous examples and string them together into a descending run. I start at the top on the neck and shift all the way down to the 7th position. I end the lick with a quick run in the Bm pentatonic scale. Once you get it down on the B and E strings, try moving this run to the other string sets (D&G and E&A.)

Once you get these patterns down perfectly, try playing them in as many musical contexts as possible! It’s one thing to memorize a lick as an exercise, but to know it completely, you should be able to play it without thinking and combine it with all the other techniques you use in your playing. Practice these riffs until you can’t mess them up even if you try. Cheers!

Sammy Boller is the guitarist for the Detroit rock band Citizen Zero. They’re touring and recording their first full-length album with Al Sutton and Marlon Young (Kid Rock, Bob Seger, Uncle Kracker). In 2012, Boller was selected by Joe Satriani as a winner of Guitar Center’s Master Satriani competition. He studied music at the University of Michigan. For more about Boller, or to ask him a question, write to him at info@sammyboller.com or follow him on Twitter.