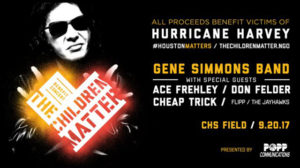 Ace Frehley and Gene Simmons will perform live together for the first time in 16 years for The Children Matter benefit concert in St. Paul, MN, which will benefit victims of Hurricane Harvey.

It’s a sure sign—along with Paul Stanley’s guest appearance on Frehley’s 2016 covers album, Origins: Vol. 1—that the hard feelings in the Kiss camp, which Frehley revealed in a 2014 interview with Guitar World, have mostly subsided.

The concert—which will take place on September 20 at CHS Field Stadium—will also feature Don Felder and Cheap Trick. One hundred percent of the proceeds will go to Matter, and their hurricane relief efforts for the victims of Harvey.

You can purchase tickets for this one-off show at thechildrenmatter.ngo.