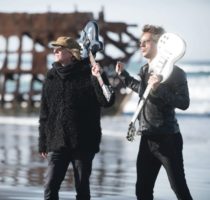 Guitars often can play a central role in the formative stages of a rock band. But in the case of Arthur Buck, the new collaborative project between singer-songwriter Joseph Arthur and R.E.M. guitarist Peter Buck, there was a specific six-string that actually brought the two musicians together—namely, a Dobro of Arthur’s that he left in Mexico after performing at Buck’s Todos Santos Music Festival a few years back.

“I needed to go and pick it up,” Arthur says. “And Peter just happened to be in Mexico at the same time.”

Recalls Buck, “We got in touch and I was like, ‘Why don’t you come swimming or something?’ And he came over with his Dobro and everything else on his back and ended up staying at my place. And we just started strumming. Initially I was going to do some acoustic guitar parts on a solo record he was working on. But then the songs started coming… .”

Those songs make up the Arthur Buck, the duo’s new debut album. It came together quickly, with Arthur and Buck penning eight of the tracks in their first few days in Mexico, and then adding several more during additional meetings. A quick studio session was set up in Portland, where Buck recorded guitars and Arthur programmed beats, and then Arthur took the results back to his home in Brooklyn and added vocals and additional instrumentation.

As for what he liked about the fast-moving process, Buck says, “I’ve worked with people where everyone equates the length of time you struggle with something to its quality. But I’ve found that’s almost always an inverse relationship. I think about all the records I loved growing up—the Beatles, Howlin’ Wolf, almost anything, really—and they were recorded incredibly quickly. And in my mind, if you write a song quickly, one of two things happen—it either sounds like something you wrote last week, in which case you throw it away, or it occurs so quickly that you make connections you wouldn’t consciously make otherwise. And I think that’s what happened here.”

Indeed, the varied music on Arthur Buck reflects the spontaneous and informal nature of the collaboration, from the breezy, acoustic-guitar-and-electronic-beats of opener “I Am the Moment” to the indie garage-glam of “American Century,” the skittering beats and soaring chorus of “Are You Electrified?” to the “hip-hop Bowie-isms” of “The Wanderer.” It is, in essence, a melding of both artists’ particular strengths.

“Joe’s obviously a great singer and a really great lyricist,” Buck says. “And while I really appreciate it, sometimes he’ll write a song that has 13 verses and one chorus. Whereas I’m a little more of a formalist—I learned to write songs by listening to the Beatles and looking through a Burt Bacharach songbook. So it’s my kind of formalist instincts balanced with his sort of, ‘just go as it goes…’.”

Now that the record is out, Arthur and Buck will be hitting the road for a short round of live dates. But they also haven’t stopped writing. “We already have five or six new ones,” Buck says. “Because one thing I’ve always hated is when a band has one album out and you go to see them and it’s the 11 songs from the record and then, like, ‘Day Tripper’ or some bullshit. I want to have a fair amount of material so we can change the set around and have new songs to show people where we’re going.”

In fact, adds Arthur, “Every time we get together we wind up with a couple of new ideas. It’s just happening. I compare it to if you’re a surfer riding really great waves. It’s really fun and you just keep catching good rides. That’s what it’s kind of like. Or, at least, that’s what it’s been like so far.” He laughs. “I hope I’m not jinxing it.”