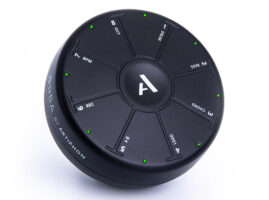 Artiphon sprang from a simple realization: digital music creation enables anyone to make any sound in the world, but most people don’t realize that yet.

Despite amazing technological advances, the creation process remains remarkably intimidating. For tens of millions of new people to start making music, the barrier between musician and non-musician needed to fall. So the startup from Nashville began designing highly intuitive smart instruments, physical and virtual, that could be played by everyone instantly.

The response was overwhelming. Artiphon’s INSTRUMENT 1, a digital device that lets you play music in many different ways, broke Kickstarter’s funding record for a music-making product, and made TIME’s list of best inventions in 2015. Artiphon repeated the feat for Orba, a round, handheld instrument that looks more like a game controller than a traditional instrument. Over $1.4 million in preorders poured in, and major retailers clamored to stock it. Orba won over The New York Times’ Wirecutter as the perfect antidote to the quarantine blues. Along with enthusiastic users, the music industry has gotten behind this innovative team. Warner Music Group led its seed round, which included Shure Microphones, Alex Chung from GIPHY, and a circle of Nashville angel investors.

But building cool new musical objects was just the start: Artiphon is also creating virtual instruments anyone can play. The company partnered earlier this year with Snapchat to create a musical lens called Scan Band. Scan Band lets users point their smartphone cameras at everyday objects (such as plants, pets, and food) to reveal colorful stickers that you can reach out and play. For example, you can transform a bowl of fruit into a virtual rock band or turn your dog into a drum machine.

A single motivation inspires these efforts: to bring music into the hands of more people of all skill levels. “Until recently, you could only make certain sounds with expensive instruments and ten thousand hours of practice. Digital music blew open those doors, but way too wide for most people to comprehend easily,” explains Artiphon founder Mike Butera, who holds a Ph.D. in Sound Studies. “We wanted to bring all the sounds to users’ fingertips, regardless of skill or experience. Every sound is out there, just waiting for you to touch it.”

Artiphon found that designing instruments around basic human ergonomics and gestures leads to more natural interactions and immediate enjoyment from players. Orba was inspired by game controllers and incorporates a haptic motor, gyroscope, and capacitive touch, all designed to respond with nuance to a user’s movements. Its body is made from a special glass-infused polymer that’s especially durable for gestural play. Orba can make music right out of the box and syncs with its cross-platform app to change sounds and save songs. And Orba can sync via MIDI to other devices and hardware, allowing it to expand to meet music makers wherever they are.

INSTRUMENT 1 and Orba inspired thousands of people to post videos of themselves playing, and as it turns out, two-thirds of Orba players have never played an instrument before. These instruments also inspire more advanced musicians and producers in their craft. T-Pain went to bat for INSTRUMENT 1, featuring it as part of his School of Business, and TikTok and Instagram are full of lo-fi beat makers and heavyweight influencers playing Artiphon instruments.

This expansive vision of music making informs all of Artiphon’s products, be they physical or virtual. They all aim to usher in a future when shareable music-making experiences are woven into our everyday habits and interactions. In this future, everyone will have every sound in the world at their fingertips, ready to express whatever emotion they wish. “People want to create multisensory music and go beyond historical limitations of traditional instruments,” Butera explains. “Like information, sounds want to be free. In the next few years, billions more people are going to realize they can be musical, and we’re excited to bring this future closer than ever before.”

Founded in 2011 and based in Nashville, TN, Artiphon designs smart instruments for the next billion musicians by combining hardware, software, and shareable content that anyone can play. The company’s electronics products, Orba and INSTRUMENT 1, are award-winning handheld smart instruments that let anyone create music wherever they go. Artiphon’s founder/CEO Mike Butera holds a Ph.D. in Sound Studies, and Artiphon’s investors include Warner Music Group, Shure Microphones, and other industry leaders.

The best reverb pedals 2021: 14 great options for your pedalboard