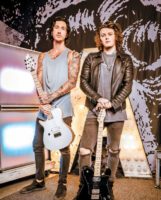 Since bursting onto the metal scene almost a decade ago with a style that pulled from sources as varied as ferocious modern metal-core, synthy electronic music and cocksure Eighties glam, Asking Alexandria have established themselves as one of the wildest and most unique heavy bands going.

But after three successful albums, including 2013’s From Death to Destiny, which reached Number Five on the Billboard 200, the British five-piece fractured when singer Danny Worsnop, who for many fans served as the focal point of the band, split under acrimonious circumstances. In the aftermath, Worsnop pursued a more traditional hard rock sound with his other project, We Are Harlot, while Asking Alexandria recruited a new singer, Denis Stoff, and released a fourth album, The Black.

Looking back now, guitarist Cameron Liddell acknowledges it was a trying period for the band. “It was a dark time for a year, a year and a half,” he says. “But with Danny, we had reached a point where we weren’t brothers like we used to be. It didn’t feel like that close connection anymore. And then you add in alcohol and drug problems… So we separated for a little while, and ultimately he left the band.”

But as the saying goes, time heals all wounds. “Sometime last year, Danny and I were both in L.A., and we met up one night and hung out,” Asking Alexandria founder and co-guitarist Ben Bruce says. “We ended up watching American Satan together, which is a movie I just starred in. And we were just chilling and he was like, ‘Man, I miss this…’ And I just went, ‘Me, too, dude!’ And it kind of just started there. I went back to Arizona, where I live, and he went back to Nashville. And then he ended up flying out to hang out again, and we were in the studio and we’d been drinking and he was like, ‘Hey, remember that song “Vultures” we wrote together years ago? Let’s record it together again for old time’s sake.’ And so we recorded it just for fun and it was so good. The chemistry was still there. When Danny finished singing I ran into the room and gave him a huge hug. And after that it was like, ‘Man, this is where you belong, you know?’ ”

Now, Worsnop is indeed back where he belongs, and after a triumphant round of touring earlier this year, the reunited band, which also includes longtime bassist Sam Bettley and drummer James Cassells, have now released a new studio record, which they chose to title, simply, Asking Alexandria. “It’s the original lineup back together again,” Bruce says. “It’s Asking Alexandria in full swing, happy and excited and hungry. It was like, what else could we possibly name this album?”

Given the excitement around the reunion with Worsnop from within the band and also among their fans, the members knew that when it came to writing and recording the new material they had to come out with all guns blazing. “It was make-or-break time,” Liddell says. “And we ended up making the best record of our lives.” That meant an album that, as Liddell puts it, “keeps our original Asking style but also ventures out. We’ve got the heavy songs, but there’s also a fresh new sound.” For example, he continues, “I feel like when we were first starting out we had a lot of electronic stuff in the music, and I think we lost that a little bit on From Death to Destiny. But now we’ve brought it back, and in a way more modern way. This music feels like the future. Honestly, there are sections on the record that, if you’d played it for me years ago I’d be like, ‘There’s no way that’s us…’ ”

True to Liddell’s words, Asking Alexandria is perhaps the band’s most forward-looking and diverse offering yet. While intense tracks like “I Am One” and “Room 138” hearken back to the band’s metalcore roots, first single “Into the Fire” is a straight-up fist-pumping hard rock anthem. Then there’s the swelling electro-pop-rocker, “Hopelessly Hopeful,” the beat-driven “Empire,” with Seattle rapper Bingx taking center stage, and the afore-mentioned “Vultures,” the song that brought Bruce and Worsnop back together, and that in its recorded form features a spare arrangement anchored by strummed acoustic guitars. Says Bruce, “I think this is the first record where we went in and we basically said to everyone, ‘Fuck you guys, we’re not doing what we’re told. We want to experiment and we want to do what we love. We’re doing this for us.’ ”

Part of that process also led to the band examining their past, present and future. This self-reflection is evident in songs like “Alone in a Room” and, in particular, the skittering “Where Did It Go?” which finds Worsnop literally scrolling through Asking Alexandria’s history album by album, even mentioning The Black—or, as he puts it in the song’s second verse, the “fourth one, the ‘wasn’t me’ one.”

“This album, there’s actually quite a lot of songs that address our time apart and the band from its inception to now,” Bruce says. “ ‘Alone in a Room,’ that opens the whole record with the words, ‘I’ve been away a little while.’ It’s awesome to hear that kind of honesty in music. And ‘Where Did It Go?’—Danny’s singing about album one all the way up to album five.” The latter song also finds Worsnop taking a jab at the newer crop of metal bands that have come up in the past few years, stating that Asking Alexandria are “writing the records your favorite bands rip off in their records.”

“Some of that’s tongue-in-cheek,” Bruce admits, “but there’s a lot of truth to what is said. I feel like a lot of bands have done that. We noticed it particularly after [Asking Alexandria’s 2009 Sumerian debut] Stand Up and Scream. So we kind of changed direction and went toward more of a rock and roll, Guns N’ Roses, Mötley Crüe, Eighties thing, but with a modern twist. And then we noticed a lot of bands doing that, too. So in the song we’re just having a bit of fun. We’re saying, ‘Yeah, we know what’s been going on. And guess what? We’re gonna write another record for you guys to look up to and probably steal in a few years’ time as well!’ ”

Adds Liddell, “I definitely think there’s bands out there that want to follow our footsteps. We paved the way for a lot of bands in our scene, so I don’t see why they wouldn’t. And I’m honored that that would even be the case. But at the same time, I still feel like we’re a baby band. Sometimes I think, Holy shit, I can’t believe we’ve been doing it this long!”

Part of their being able to do it for this long, it would seem, has hinged on the band members’ determination to push through adversity. Says Liddell, “That last tour with Danny, a North American tour, was the lowest of the low, at least for me. It wasn’t the best of times. And I think the fans could see that onstage we weren’t that tight-knit family anymore. That kind of got everyone down and depressed, and we didn’t know what was going to happen after that.”

During that period, Bruce says, “We’d just been pushed to the breaking point. Everyone was unhappy, everyone was messed up on drugs and alcohol, it wasn’t a happy place in our lives.” Nowadays, he continues, things are different. “We’re all a bit more chill. We’re older, we’ve gone through the party phase. Everyone’s married or in relationships. I’ve got two kids and a wife at home. We’ve calmed down a lot.” He laughs. “We’re more likely to go out for a meal together and have a chat and then go back to the bus and watch a movie than to go, you know, find a bunch of blow and just go crazy. We’re just more mindful of one another, and of not burning each other out like we did the first time around. Which is good, because as it stands we have so much on the books. There’s a lot of tours lined up, and we want to do the U.S., all of Europe, Japan, Asia, Australia, South America… We want to go everywhere in 2018.”

Liddell concurs. “We’re not finished,” he says. “We’re nowhere near finished. This new chapter has only just begun. And it’s definitely going to be the biggest chapter in our career, for sure.”

NAMM 2020 video: Watch how easy it is to swap pickups in the new Relish Trinity electric guitar

GW live at NAMM 2020: Graph Tech’s Ratio machine heads will get you in tune – and make sure you stay there