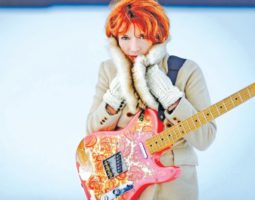 Sue Foley named her 11th studio recording The Ice Queen, but the Texas blues guitarist insists that the title in no way references her personality. “No, not at all. I think I’m a nice person,” she says with a laugh. “The title is a celebration of my Canadian heritage—I come from the north, where it’s cold all the time. But it’s also about my love of Albert Collins. He was the ‘Ice Man’ with the Telecaster, and he was a huge influence on me. I base a lot of my guitar style on what he did.”

Since she left her native Vancouver at age 21, Foley has spent the majority of her time immersed in the Austin blues scene. She cut her teeth on the stage of the famous Antone’s nightclub while studying and befriending some of the town’s legendary guitarists, two of whom, Jimmie Vaughan and Charlie Sexton, turn up as guests on The Ice Queen.

Sexton powers up a mean slide guitar performance on the sexy blues grinder “Come to Me,” while Vaughan turns up on a pair of cuts, trading vocal and guitar lines with Foley on the sassy shuffle “The Lucky Ones,” and firing off emotive and elegant leads on the soulful torch ballad “If I Have Forsaken You.” “There’s no way I would give those guys direction,” Foley notes. “You ask people to play with you because you want what they do, not what you tell them to.”

The pink paisley Telecaster-totin’ Foley is no slouch herself on the guitar. ZZ Top’s Billy Gibbons is such a fan of her tasteful, minimalist manner of playing that when he came to the studio to guest on the low-down, Jimmy Reed–style blues number “Fools Gold,” he insisted that Foley take the solo. “I would have let him do a guitar solo if he wanted,” Foley says, “but he was content with hittin’ the rhythm and playing harmonica. It’s funny, though, he plays harp just like he plays guitar. You hear that sound and you just know, ‘Yep, that’s gotta be Billy Gibbons.’ ”