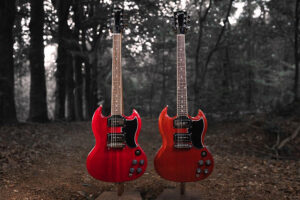 Tony Iommi’s iconic riffs, heavy tones, and massively influential albums created the blueprint for heavy metal and many other genres to follow. After an early accident that almost ended his career as a guitarist, Tony persevered to become universally loved and revered. And while Tony’s innovative tuning and playing styles have always been a major part of his monstrous tones, his original, heavily–modified 1964 Gibson SG Special, nick-named “Monkey”was at the center of it all.

Watch and share the new Tony Iommi animated clip from Gibson TV below, HERE. The video features the Black Sabbath song “Fairies Wear Boots”and follows a monkey a monkey sticker has been on Tony’s original guitar since the beginning as he travels through a dark forest until he finds the temple of doom where Tony Iommi lives.

Epiphone is proud to release a guitar based on the iconic original that launched countless heavy riffs in a striking Vintage Cherry finish. The Epiphone Tony Iommi SG Special features a two-piece mahogany body, a bound one-piece mahogany neck with a rounded profile, an Indian laurel fretboard with 22 frets, a Graph Tech nut, Grover Rotomatic tuners with contemporary style buttons and chrome-covered Epiphone PRO P-90 pickups that are wired to CTS potentiometers and Orange Drop capacitors. A static cling reproduction of Tony’s “Monkey” sticker is in the included hardshell case. The new Epiphone Tony Iommi SG Special is available in both left and right-handed versions.

Tony Iommi is synonymous with heavy rock, his innovative, de-tuned, dark riffs are considered to be the blueprint for hundreds of bands that followed. Born on February 19, 1948, in Birmingham, England, left-handed Tony picked up the guitar after being inspired by the likes of Hank Marvin & the Shadows as a teenager. Iommi’s musical career was nearly derailed prematurely as he suffered a horrible accident at a sheet metal factory, when a machine sliced off the tips of the fingers on his right hand. Figuring that his guitar playing days were behind him, a friend turned him onto guitarist Django Reinhardt (who lost use of two fingers in a gypsy caravan campfire accident), inspiring Tony to give the six-string another go, with soft plastic tips attached to the ends of his fingers. By 1967, he had played with several blues-based rock bands one of which evolved into Polka Tulk (later titled Earth and then Black Sabbath), with bassist Terry “Geezer” Butler, drummer Bill Ward , and singer John “Ozzy” Osbourne.

Black Sabbath created the blueprint for heavy metal with such incredibly influential, all-time classic releases as their 1970 self-titled debut and Paranoid, 71’s Master of Reality , 1972’s Vol. 4 , and 1973’s Sabbath Bloody Sabbath . These albums lifted Black Sabbath to one of the world’s top hard rock bands in the process. Iommi’sguitar playing propelled such metal standards as “Black Sabbath,” “N.I.B.,” “Paranoid,” “Iron Man,” “War Pigs,” “Into the Void,” and “Children of the Grave,” which boast some of the most recognizable guitar riffs in rock history .

Black Sabbath had multiple line-up changes following Osbourne’s departure in 1979, with Iommi being the band’s primary composer and the only constant member throughout its history. All while keeping Black Sabbath touring and releasing albums, Tony released the well-received solo albums Iommi and Fusedand formed the successful band Heaven & Hell with bandmates with Ronnie James Dio, Geezer Butler and Vinny Appice. Heaven & Hell released The Devil You Know (2009) to rave reviews and world tours.

In 2011, Iommi published his autobiography titled Iron Man: My Journey through Heaven and Hell with Black Sabbath which went on to make the New York TimesBestseller list.

Black Sabbath’s final studio album and nineteenth overall, 13   (2013), featured all of the original members except Ward. Despite undergoing both chemo and radio therapy treatment for Follicular (non-Hodgkin) Lymphoma, Iommi remained his ever-determined self, and writing for the new Sabbath album continued at his home studio with Ozzy and Geezer in the UK for an extended period. Tony had recovered sufficiently to play a hometown gig in Birmingham, along with headline appearances at Download Festival and Lollapalooza, the mighty Sabbath were back! 13 became a staggering success and reached #1 in the U.S., amazingly the first Sabbath album to do so. It also got to the top in most countries around the world, in the U.K. setting a record for being a 40-year span between #1’s, the longest ever!

Black Sabbath has been ranked by MTV as the “Greatest Metal Band” of all time, and placed second in VH1 ‘s “100 Greatest Artists of Hard Rock” list. Rolling Stone magazine ranked them number 85 on their “100 Greatest Artists of All Time” while  Iommi was ranked number 25 in Rolling Stone   magazine’s “100 Greatest Guitarists of All Time.” Black Sabbath have sold over 70 million records worldwide. Black Sabbath were inducted into the UK Music Hall of Fame in 2005 and the Rock and Roll Hall of Fame in 2006. They have also won three GRAMMY Awards, two for Best Metal Performance for “Iron Man” and “God is Dead?” Iommi also received a GRAMMY nomination this year for his work with Candlemass. During their “The End Of The End” farewell tour, the band played their final concert in their home city of Birmingham on February 4, 2017and in 2019, the band was presented their third GRAMMY, the Lifetime Achievement Award. In February of 2020, Tony received a GRAMMY nominationfor his work with Candlemass.

In the Spring of 2020, Gibson launched the replica Gibson SG Monkey guitar. November 2021 saw a completely different side to Tony with the launch of a perfume in collaboration with Italian brand Xerjoff. As well as the scent, Tonycreated a track and video, his first instrumental single.

2022 brought appearances at both the opening and closing of the Commonwealth Games in Birmingham. Tony duetted at the opening with Indigo Marshall and was joined by Ozzy for the closing song. Tony also plays on two tracks for Ozzy’ssolo album, Patient No. 9, due for release in September 2022.

For over 140 years, Epiphone has been a leading innovator in instrument design with models like the Casino, the Texan, and Masterbilt Century Archtop Collection. Epiphone began as the “House of Stathopoulo” family business in Sparta in the 1870s and rose to fame during the jazz age in Manhattan before joining Gibson brands in 1957. Today, Epiphone continues to make history from its headquarters in Nashville, TN. Epiphones have powered classic recordings by Les Paul, The Beatles, and The Rolling Stones along with today’s top artists like Peter Frampton, Gary Clark Jr., Tommy Thayer of KISS, and Lzzy Hale. Epiphoneoffers innovation, history, and a lifetime guarantee. Whether you are learning your first song in your bedroom, or rocking an arena, Epiphone has always been there, for everyone, for every generation, for every stage. For more information, visit: Epiphone.com and follow us on Twitter, Facebook, YouTube, and Instagram.