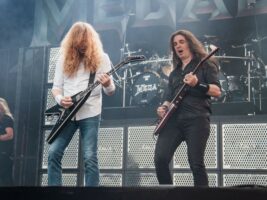 Kiko Loureiro on writing music for Megadeth: “I don’t think about Dave…we have a perspective he doesn’t have”

Kiko Loureiro has spoken out about what it is like to write music with Dave Mustaine, stating that while the frontman is “very direct” about what he wants, he believes that the less seasoned members have a unique edge when it comes to writing new tracks.

READ MORE: Dave Mustaine Says He Was “Dumb” To Punch James Hetfield When He Was In Metallica

Speaking with VM Music last Friday (23 September), Kiko Loureiro has recalled what it is like to work with Dave Mustaine and explained that he ‘doesn’t think about’ the frontman when writing new music for Megadeth.
“It might sound funny, [but] I don’t think about Dave,” the guitarist states. “I’m not pleasing Dave. I’m pleasing Megadeth. Because I know that if I please Megadeth, I’m pleasing Dave because it’s almost like the same entity.”
He continues, explaining why he has this mentality when writing music for the band. Here, the guitarist says he hopes that the remaining members will never view their lack of longevity in the band as a weakness or write music to simple appease the frontman — claiming they have a way of hearing the music that Mustaine will never understand.
“Dave doesn’t have the perspective to listen to Megadeth outside of Megadeth. He was always inside Megadeth, so he was always the leader. We were, at some point, a fan and a listener. So, we have a perspective he doesn’t have, and they need to understand this as a good thing, not a bad thing.”
Elsewhere in the discussion, Loureiro confirms that while the members all feel confident enough to pitch ideas for new tracks, they all understand that Mustaine will always get the final decision in the band:
“It’s a creative process, and everybody is free to bring their own ideas,” he says. “[But] Dave knows what he wants, so he’s very direct. [If I’m] just like, ‘Maybe don’t improvise the solo in the opening of the album.’ and Dave thinks, ‘I think an improvised solo is better…’ he knows what is better for Megadeth at the end of the day. So, I also respect that. If he thinks, ‘That sounds Megadeth,’ who am I to say, ‘This is not Megadeth,’ you know?”
The post Kiko Loureiro on writing music for Megadeth: “I don’t think about Dave…we have a perspective he doesn’t have” appeared first on Guitar.com | All Things Guitar.