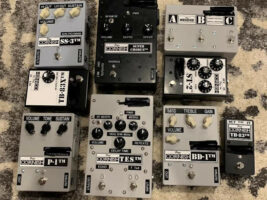 A guitar store in Canada is selling ten ultra-rare Pete Cornish pedals… for over £12,000

A Canadian guitar shop has listed a bundle of ten ultra-rare Pete Cornish guitar pedals for sale online, with an asking price of over £12,000.

Listed on Reverb yesterday (25 September), Canadian guitar store Gear Garage has listed an exclusive range of guitar pedals by Pete Cornish for sale – including a Super Chorus, a TES delay and a P-1, the world’s first double isolated fuzz pedal.
Currently listed at an impressive £12,090, the page lists all of the ultra-rare effects included in the sale and notes that all are in near mint condition and sound as if they were new.
A Three Channel Splitter and the tone shaping ST2 all come included, alongside the SS3, which is listed on Pete Cornish’s website as being a personal favourite of David Gilmour, Lou Reed and Noel Gallagher.
In addition, both the TB-83 and TB-83X treble boost models are listed as standard, as well as the BD-1 overdrive pedal for bass.
During his time in the industry, British designer Pete Cornish has spent over three decades making pedalboards and building effects for some of the biggest names in the guitar world. Of his extensive list of famous clientele, Cornish has designed elaborate, fully custom pedalboard systems for the likes of rock royalty including The Who’s Pete Townshend, Black Sabbath’s Tony Iommi and Dire Straits’ Mark Knopfler.
The listing for the pedals can currently be found on Gear Garage’s Reverb page. Those fortunate enough to consider purchasing the bundle are advised to act quick as the website states that numerous potential buyers already have the item placed in their basket.
The post A guitar store in Canada is selling ten ultra-rare Pete Cornish pedals… for over £12,000 appeared first on Guitar.com | All Things Guitar.