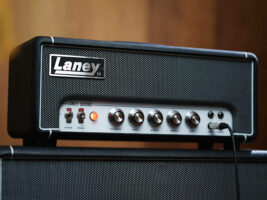 Laney has introduced a new version of its original Supergroup amplifier. The LA Studio is a 3-watt version of the head that includes a built-in Two Notes Torpedo unit, and the ability to use the amp without plugging in a cabinet.

The LA Studio, at first glance, looks almost exactly like the 30-watt LA30BL. There are controls for gain and presence, and a three-band EQ – no master volume here. However, around the back of the unit the differences are more apparent.
There’s a section on the back panel dedicated to the on-board Two Notes Torpedo module. This includes an XLR DI output with ground lift, and a headphone jack. The former can be run straight into a mixing desk in a live situation or into an audio interface. There’s also a rotary selector to choose between the six built-in virtual cabinets, and a control for the output level. There’s also digital connection in the form of a USB port and MIDI in/through jacks.
The USB connector allows you to hook the amplifier up to the Torpedo Remote software to design your own recording environment, and import it for use in the amplifier.
Also on the back panel are the more traditional power amplifier outputs, with jacks for both eight and 16-ohm connection. These run at a rather respectable three watts, allowing you to use the amplifier’s full gain range without blasting your ears apart. If you need it to be even quieter, the amp’s standby switch has been replaced by a “brake” switch that drops the wattage down to 0.1 watt.
Aside from the volume levels, the amp retains the fully-tube sound of the LA30BL, with three ECC83 large-plate preamp valves and a single 12BH7 power valve.
Hear the amp in action with Laney’s demo below.

The LA Studio lists for £849. Find out more over at laney.co.uk.
The post Laney’s new LA Studio is a low-watt tube Supergroup with an onboard Two Notes Torpedo Captor appeared first on Guitar.com | All Things Guitar.