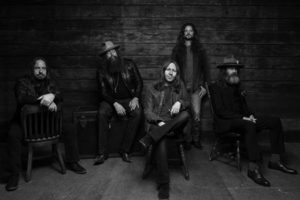 Southern rock powerhouse Blackberry Smoke have premiered a new song, “Let Me Down Easy,” and you can hear it below. The upbeat, folksy, acoustic ballad represents the third official taste of Find a Light, the band’s new album, which’ll be released April 6 via Thirty Tigers. For the first taste and second taste—the Led Zeppelin-esque “Flesh and Bone” and the 12-string-riffing power-popper “Best Seat in the House”—head here and here.

“Let Me Down Easy,” which features Amanda Shires on backing vocals, is a catchy crowd pleaser that’s layered with rich acoustic guitars—not to mention a resonator, which enters the song at 1:48, just in time for the solo. The track recalls some of Eric Clapton’s best Seventies material—or maybe even a very happy version of the “Curtis Lowe”-era Lynyrd Skynyrd. Like most of the band’s best tracks, it was written by frontman/guitarist Charlie Starr, this time with Keith Nelson, who also co-wrote “Best Seat in the House.”

“The new album is a melting pot of Blackberry Smoke music with a wide range of sound and emotion,” Starr says. “I think it’s our most inspired work yet.”

Find a Light is available for pre-order. For more about the band, visit blackberrysmoke.com.

How to play guitar in 3 diverse Fender Telecaster styles

Adrian Smith talks fishy tour stories, from falling in front of 20,000 people to being recognized while angling