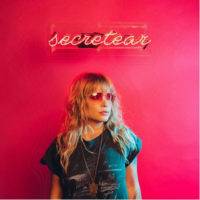 Today, Guitar World has teamed up with acclaimed singer/songwriter Brandy Zdan to premiere her hard-rocking new single, “I Want Your Trouble.” You can check it out above.

The song is one of the highlights from Zdan’s second solo album, Secretar, which she recorded with producer Terry Morgan and drummer Aaron Haynes, who—among other credits—has worked extensively with The Texas Gentlemen. Haynes though, also happens to be her husband, and their relationship was one of the major inspirations behind “I Want Your Trouble.”

“This song was co-written with my drummer/husband/collaborator, Aaron Haynes. It came out of a text message he sent me during our courtship,” Zdan explained to Guitar World. “All it said was: ‘I Want Your Trouble.’ I knew it had to be a song and one that punched you in the face.”

“I wrote and tracked the song on my go to Gamble Guitar Works Custom T-style with Lollar vintage T pickups, through a Fender Princeton reverb, of course,” Zdan continued. “I love the driving sonic layer that is created with the overdriven bridge pickup power chords and the synth bass.”

Secretar is set for a May release. You can pre-order it here.

Zdan will also hit the road with Buddy Guy later this month. For a full list of dates, you can stop by brandyzdan.com.