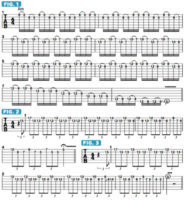 Challenging Phrases Designed to Lift Your Chops to the Next Level

Mastering metal and hard rock guitar poses a great variety of musical and technical challenges, encompassing everything from the development of solid and reliable pick- and fret-hand rhythm playing technique to a complete understanding of metal-style licks and patterns and the scales upon which they are based, coupled with fleet-fingered fret-hand technique.

This month, I’d like to demonstrate a couple of fast, challenging lead-type phrases that are designed to lift your chops up to the next level.

One of my favorite things to do when soloing is play long note sequences based on an unwavering rhythm, such as steady 16th notes or eighth-note triplets, as this approach serves to create rhythmic tension and aids in the construction of a powerful solo. This is something Randy Rhoads loved to do, and his “Over the Mountain” solo is a prime example of this approach. You can hear it below.

FIGURE 1 is played along these lines and is executed in steady 16th notes. Based primarily on the A Dorian mode (A B C D E F# G), the entire eight-bar run is fretted with just the index finger and pinkie, with repeating pull-offs performed on the top two strings in bars 1–6. I begin on a high C note and then pull off to A, three frets lower. The pull-off “shape” then moves over to the B string, after which I alternate this movement between the two strings.

At the end of bar 1, I repeat the pull-off on the high E string to invert the phrase, so that it starts on the B string in bar 2. At the end of bar 2, I shift up two frets, resulting in a different note played for the last 16th. As you play through the run, notice that this occurs with each position shift at the end of each two-bar pair. In bars 7 and 8, I move laterally across the strings, from high to low. In bar 8, I substitute F for F#, briefly alluding to A Aeolian (A B C D E F G).

FIGURE 2 offers a phrase that’s more challenging for the pick hand. Again based on a combination of A Aeolian and A Dorian, this line is played in a rhythm of steady eighth-note triplets, with each triplet “cell” consisting of one note on the high E string followed by two on the B. Both B-string notes are fretted with the index finger, which shifts back and froth, and the descending notes on the high E are fretted with either the index or middle finger.

The eighth-note triplets move down in groups of three, after which I begin from the second “cell” and continue down one position lower. After the initial downstroke in the pickup bar, the next two notes (at the beginning of bar 1) are picked with upstrokes, followed by a single downstroke, resulting in a repeated picking pattern of up-up-down, up-up-down, etc.

This technique, which is an example of what’s known as economy picking, can feel weird at first, but with practice you’ll find that it is indeed economical and useful for this type of string crossing scheme.

FIGURE 3 offers a twist on this idea, with the musical motif from FIGURE 2 now performed in a melodic contour of four steadily descending triplet groups.