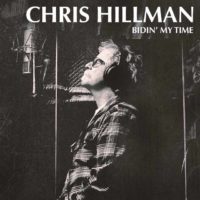 When we spoke to Chris Hillman in the spring of 2016, we asked if he had a new album in the works. “I do have material,” he said at the time. “I’m just lazy. But I think a new album will start to happen in June or July.”

It turns out Hillman isn’t so lazy after all. The former member and/or co-founder of the Byrds, the Flying Burrito Brothers, Manassas and the Desert Rose Band is releasing a new album, Bidin’ My Time, September 22 via Rounder Records.

The album—his first studio effort since 2005’s The Other Side—was produced by Tom Petty and executive produced by Herb Pedersen, Hillman’s longtime collaborator and co-founder of the Desert Rose Band. Best of all, the disc features a list of guest appearances that have longtime fans seriously chomping at the bit. These include former Byrds David Crosby and Roger McGuinn; Desert Rose Band alumni Pedersen, John Jorgenson and Jay Dee Maness (who also played pedal steel guitar on the Byrds’ classic 1968 album, Sweetheart of the Rodeo); Petty and fellow Heartbreakers Mike Campbell, Steve Ferrone and Benmont Tench, plus Mark Fain, Josh Jové and Gabe Witcher.

The album kicks off with a new version of Pete Seeger’s and Idris Davies’ “The Bells of Rhymney,” which the Byrds recorded in 1965. Crosby and Pedersen contribute otherworldly harmonies to the tune, which swells from stripped-down folk into a layered rock-and-roll cry.

“I decided to cut it again because I wanted to sing with David and Herb, two great tenors,” Hillman says. “David just loves Herb’s singing, and at 75 years old, David is still a powerful singer—one of the best I’ve ever worked with or been around.”

“Here She Comes Again” (which you can hear below) was written by Hillman and McGuinn, and until now, could only be found on a live album in Australia. Hillman plays bass on the track—the instrument he played with the Byrds and Flying Burrito Brothers but hadn’t picked up in more than 30 years. “She Don’t Care About Time” was written by Byrds co-founder Gene Clark, who died in 1991, and originally recorded by the Byrds in 1965.

Hillman also reworked “Old John Robertson,” which originally was featured on The Notorious Byrd Brothers in 1968. The new recording, dubbed “New Old John Robertson,” is about a kind old man who lived in Hillman’s hometown. The album also includes interpretations of the Everly Brothers’ “Walk Right Back,” Petty’s “Wildflowers” and “When I Get a Little Money,” which was written by family friend Nathan Barrow.

Of course, the album features several new Hillman compositions. There’s album standout “Restless” and “Such Is the World We Live In,” a front-porch jam session that imagines what Hillman’s great-grandfather would say about current events. “Given All That I Can See” is a call for mercy and grace in an era beleaguered by hate and fear.

“I did everything I felt was right in the moment,” Hillman says. “I did my very best. That’s all any of us can do.”

To preorder Bidin’ My Time, head here. For more about Hillman, visit chrishillman.com. Be sure to check out Hillman and Pedersen’s just-announced tour dates below.

NAMM 2020 video: Watch how easy it is to swap pickups in the new Relish Trinity electric guitar

GW live at NAMM 2020: Graph Tech’s Ratio machine heads will get you in tune – and make sure you stay there