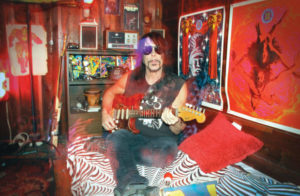 Monster Magnet leader Dave Wyndorf was born and raised in Red Bank, New Jersey, but for as long as he can remember, the music of Detroit has been revving through his heart. Back in the Seventies, he’d power through MC5 covers as the frontman of Shrapnel; fast forward 40 years and he’s serving up unpolished, fuel-injected fuzz with a Motor City feel on Monster Magnet’s latest full-length, Mindfucker.

“When I was a kid, I thought that was the most bad-ass shit. I loved all rock, but that stuff, in my kid’s mind, was the real stuff,” Wyndorf says, citing the Stooges’ Ron Asheton, Grand Funk’s Mark Farner and Alice Cooper’s Glen Buxton as just a few of the Michigan riffmakers he and fellow Monster Magnet players Phil Caivano and Garret Sweeney channeled in the studio.

In turn, the raw power of mid-western rock can be heard full-force on Mindfucker’s “Rocket Freak” and “Soul,” songs that favor a from-the-streets swagger over the cosmic journeying and 11-minute track times of 2013’s Last Patrol. A reaction to the previous album’s “decidedly melancholy trip,” Wyndorf wanted the quickly written, turbo-charged Mindfucker to immediately melt faces.

“What I’m looking for is some kind of blast of excitement; that usually has to do with sound and approach rather than technical prowess or speed,” he says, noting how the dueling pull-offs and screaming bends Caivano and Sweeney firebomb into the title track were off-the-cuff, un-finessed attacks.

Monster Magnet may be keeping it straightforward with Mindfucker’s arrangements, but Wyndorf rails against current-day idiocracy in its lyrics. “Every once in a while the stupid people rise to the top, and that’s what happened: Scared, dumb people won,” the frontman says, noting how social media oversharing and the current political climate helped shape the record’s apocalyptic visions. Amidst this daily chaos, though, Monster Magnet are coping via cranked amps and some critical thought. Wyndorf says with a laugh, “I really just wanted to make a simple ‘sex, drugs and rock and roll’ record, but all this other stuff came in.”