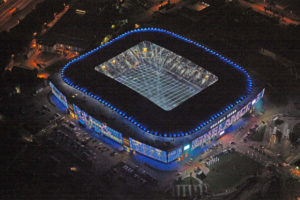 Hosting more than 300 events per year, the Ghelamco Arena is looking at growing its visitors beyond those who turn out every week to watch Belgian football giants KAA Gent (aka The Buffalos). Marc Maes takes a look at its potential for expansion…

The Ghelamco Arena was inaugurated in July 2013, the 20,000 capacity stadium becoming the country’s first new outdoor arena in more than 30 years.

For the audio-visual integration of the prestigious stadium, the real estate promotor of the arena and the KAA Gent team management put pen to paper on a partnership agreement with AV company Play AV. In its first phase, Play AV took on design duties (with Bose Modeler software), installation and technical management of the stadium’s extensive audio system: 64 flown Bose weatherproof speaker cabinets (32 LT 9702 WR tops and 32 MB24 WR subs with a total output power of 64 K) serving the arena’s stands. This system is used as a main emergency public address system but also as an ‘atmosphere builder’ during the football. In addition, Play AV provided and installed 64 Bose 802 speaker cabinets in the corridors and entrance halls.

In February of this year, event services company The Arena invited press and business clients for a presentation of the Ghelamco Arena’s additional corporate event facilities, such as its conference and meeting rooms. “From day one, the plan was to make extensive use of the huge infrastructure potential of the stadium,” explains Ewout Boesman, logistics manager at The Arena. “As from 2014, the huge business lounge, the promenade and 11 individual conference and meeting rooms were opened for all kinds of business and corporate events. Most rooms can be configured in meeting room, theatre setting or any layout wanted by the client.”

In addition, Meetdistrict, a subsidiary of stadium owner Ghelamco, took on the development of another 10,000 m² worth of events space within the venue, including a 380-seater auditorium, 10 meeting rooms and some 100 offices.

The Business Lounge, meanwhile, is the arena’s biggest venue: during football matches, the lounge offers room for 1,400 corporate visitors before and after the game. “In addition, the Business Lounge is used up to four times per week for corporate events, dinners, networking events and various kinds of presentations, with a DJ or live music,” explains Tom Van de Veire, who, as a project manager at Play AV, is responsible for all the technical aspects during events in the Ghelamco Arena. “The capacity varies between 1,400 and 500 people. The basic configuration consists of 30 flown Bose Freespace DS100Se full-range cabinets, used for background music and announcements. Like the other speakers in the stadium, the DS100Ses are also part of the overall security and emergency audio system. For presentations or live music, we bring in extra gear, like L-Acoustics 12XT or Kara speakers and Dante-connected Yamaha QL-series or Digico SD8 or SD9 mixing consoles. Every configuration is tailor-made to fit the event and organiser’s rider.”

The Ghelamco Arena also includes a prestigious auditorium, used for conferences, presentations and meetings. The auditorium is utilised by Meetdistrict, which also takes on the management of offices and meeting rooms where a mobile Bose L1 series II system caters for speech reinforcement.

“The auditorium is served by two Bose Roommatch 12020 enclosures plus a MB24 sub speaker flown on either side of the stage and two flown RMU206s fill speakers for the back rows, powered by a Bose PM8500 amplifier” continues Van de Veire. “The Roommatch speakers are configured with a dispersion pattern of 120°/20°, offering pristine audio clearness throughout the auditorium.” The audio system is controlled by an Allen & Heath GLD-80 console with Dante. At the client’s demand, Play AV also provides additional lighting, video projection or led-wall solutions.The arena’s 800m long open circle promenade is also used for events and can be divided into nine areas, varying from 160 to 500m².

“For large scale events, we have crews up to 20 people working in the promenade,” adds Van de Veire, who spends ‘about half of his time’ at the stadium maintaining contact with customers, designing its various AV solutions in accordance with the client’s demands, preparing the equipment list, monitoring the workflow and dispatching engineers for set-up and technical operation.

“Each room has a basic set up consisting of four Bose Freespace BS40 ceiling speakers for background music and security announcements” continues Van de Veire. “The 412m² B1 lounge area has a standard configuration of two Bose Roommatch RMU 208 speakers. For conferences, we provide either Bose 802 or L-Acoustics speakers.”

In addition to the audio system, The Arena also equipped the B1 lounge with a high quality beamer and screen display system. “The plan is to have the same technical installation in the other lounges as well,” comments Boesman.

Nine meeting-boxes, with a capacity between 14 and 24 people, have Bose DS16 SE ceiling speakers as standard background system. “The arena and stands (with the outdoor speakers), and every single room or venue, including toilets, are all provided with a combination of DS16 and DS40 ceiling speakers,” explains Van de Veire. “During sports events, it’s crucial that emergency messages are heard all over the stadium. The complete sound system is controlled by a central PC, dividing the stadium in 18 areas and steering four amp-racks (located in the four corners of the stadium) each containing seven PM 8500 amplifiers.”

“What makes the Ghelamco Arena so special is the possibility to organise speeches or presentations for up to 8,000 people in the arena on the ‘Buffalo pitch’ itself”, concludes Van de Veire. “We bring in extra L-Acoustics or D&B touring speakers – the arena then becomes a combination of a unique location with top speech intelligibility. We at Play AV provide the full audio-visual support to deliver the best quality and service.”

“This prestigious project is the result of a transparent partnership with mutual respect”, summarises Dirk Verhellen, CEO Play AV.

“We at The Arena are very proud to welcome new clients after every event that takes place in one of our locations,” adds Boesman. “Because we always keep upgrading and innovating the rooms, we offer new possibilities to our clients – and this is why so many people are eager to have their event in an arena where events become victories.”