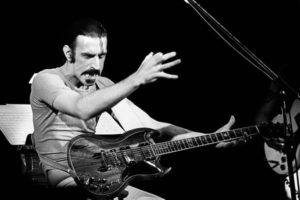 Frank Zappa is known as one of music’s great improvisers, and it’s a gift that his son Dweezil has as well.

A couple years back, Dweezil sat down with Reverb to share a few of his favorite tricks he learned from his father and some of the logic behind his approach to improvised soloing.

In the interview,  Dweezil talks about his father’s remarkable improvisational skills and his ability to play for long periods without ever repeating himself. Dweezil says that was always his goal when playing his father’s music—to build the extensive vocabulary necessary for that level of improvisation—and in this video he shares a few of his father’s techniques that help him do it successfully.

In a related video, also included at bottom, Joe from Reverb looks at three meat-and-potatoes Zappa-esque riffs to give just a brief introduction to his varied style.

You can read more about Frank Zappa’s techniques here, as well as learn about his gear at Reverb.