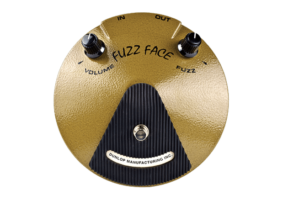 How to Buy a Fuzz Box: A Guide for the First-Time Buyer

Is there anything more luscious than a Big Muff?

Who can resist those hairy, in-your-face mouthfuls of fuzz? It’s the box guitarists dream about plugging into all day and night. No wonder Electro-Harmonix named the Big Muff Pi distortion pedal after it.

But the Pi ain’t the only box in town. In fact, there are probably more than 300 models of overdrive, distortion and fuzz pedals in production today. How do you decide which one is right for you? Well, good readers, it’s time to practice your licks and get ready to blow some tweeters as we show you 10 things you should know before you buy a fuzz box.

Distortion pedals generally come in one of three varieties: overdrive, distortion and fuzz. Overdrive provides a gain boost that pushes an amp harder and causes it to distort. Distortion processes the guitar’s signal and transforms it into a screaming, vicious beast before it hits the amp. And fuzz produces an extreme form of distortion called square-wave clipping: like a Sixties barbershop, everything that goes into it come out with a flat top. Note: Many manufacturers use these terms interchangeably, so don’t ignore overdrive or fuzz boxes when you want distortion and vice versa.

When auditioning a pedal, make sure you play chords as well as single-note riffs and leads. As true fuzz pedals produce exaggerated distortion, they generally can’t handle chords other than a fifth diad, familiarly known as a power chord. But that doesn’t mean you should avoid fuzz altogether. The best fuzz boxes can make a single note sound like a 2,000- pound bee plugged into a wall of Marshalls, while the worst pedals will make your guitar sound like an elephant dropping a 2,000-pound load of dung.

If you plan on using a distortion box for playing lead, make sure that it also provides a good amount of gain boost, otherwise your guitar signal may disappear faster than Michael Jackson evading a summons. Extra gain can increase sustain, which is a good thing, but excessive gain may result in noise, feedback and hiss…which can also be a good thing. At the very least, the gain control should provide enough boost to match the guitar’s volume level when the effect is bypassed. Many players use overdrive pedals like the Ibanez Tube Screamer to boost the guitar’s gain for solos.

With the exception of a handful of overdrive pedals like the Klon Centaur, most distortion boxes boost or cut EQ frequencies and affect the guitar’s tone. Many pedals sound wicked when you’re playing by yourself, but their sound virtually vanishes when you use them with a band, and you end up looking like the world’s worst air guitarist. If the pedal you’re auditioning has tone controls, dial in a sound you like, then have a friend jam along with you. If the tone doesn’t cut through, you may want to consider another pedal.

While many pedals sound great with every knob turned up to 11, some pedals, like the Z-Vex Fuzz Factory, generate such extreme distortion that they don’t produce any sound at all when everything is maxed. The best tones usually lurk in those elusive in-between settings, so take your time and tweak those knobs. Start with the knobs turned down and work your way up.

A lot of distortion pedals sound best when the amp is dialed to a clean setting. But many stomp boxes, especially overdrive and fuzz effects, sound better when the amp has a dirty edge. Experiment with various amp distortion settings while you mess around with the pedal’s knobs. Get rough with that amp; no one will slap you or call you a perv.

They don’t call them stomp boxes for nothing. Look for a pedal that is built like a tank and will support your weight even if you should balloon to John Popper-like proportions. Control knobs should be easy to reach and see, but they shouldn’t be placed where you can mistakenly step on them and disrupt your carefully dialed-in settings. The bypass switch should engage with a noticeable click, or the pedal should have an LED that lets you know when the effect is on.

Trust me—James Hetfield wasn’t singing about the Duracells in Kirk Hammett’s Boss distortion in “Battery.” You may think your pedal is going to last all night because you put the Energizer Bunny in it, but remember that rabbits have a habit of dying when it’s least convenient for you. If you plan to use your pedal onstage, buy one that can be powered with AC. You may need to shell out a few extra bucks for an AC adapter, but in the long run it’s a lot cheaper than what you’ll spend replacing batteries.

Look for pedals that offer true-bypass circuitry. This feature removes the pedal’s electronic circuit when the effect is switched off, letting your guitar signal pass through the pedal without affecting its tone or gain. Effects without true bypass bogart tone like your bass player sharing his stash, and when you chain several of these pedals together your tone will be as mighty as an outfielder on steroids. If someone offers you a triple bypass, leave the store immediately—you probably walked into Surgery Center by mistake.

Tube-amp elitists may declare that everything solid-state is crap, yet they exalt the tones of players like Jeff Beck, Jimi Hendrix and Stevie Ray Vaughan, each of whom relied heavily on solid-state Rat, Fuzz Face and Tube Screamer pedals, respectively, to create their signature sounds. Fuzz fanatics argue at length about the virtues of germanium versus silicon transistors. Don’t obsess about minute electronic circuitry details; let your ears be your guide. There’s nothing wrong with using a pedal with an integrated- circuit design if it sounds sweeter to you than an expensive tube-equipped stomp box.