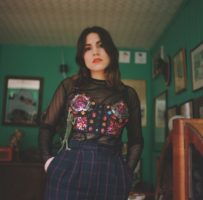 Last year, EERA, aka solo artist Anna Lena Bruland, released her stunning debut album Reflections Of Youth to much critical acclaim. Daniel Gumble caught up with her and co-producer Nick Rayner backstage at London venue The Lexington to discuss the record’s unique sonic identity and the benefits of having its co-producer taking up FOH duties on the road…

In a low-lit backstage room at North London venue The Lexington PSNEurope finds Anna Lena Bruland – better known as EERA – and co-producer of her brilliant 2017 debut album Reflections Of Youth, Nick Rayner, in chatty, affable mood. In just over two hours time, EERA will perform to a sold-out crowd with Rayner handling FOH duties.
For now, though, they are settled in to tell us about the recording and production process of one of last year’s most exciting debut releases. Combining raw, guitar driven rock with ethereal, minor key soundscapes, the central themes that course through the record are reflected sharply in its sonic DNA, at once delicate and powerful; shimmering and snarling.

Within the first few songs of EERA’s live set, it becomes immediately apparent that having Rayner behind the desk at FOH is a bonus that many artists would readily sacrifice limbs for. As the record’s co-producer, his understanding of the album’s dexterous sonic palette proves invaluable in not just replicating the feel of the track’s on the live stage but also in augmenting and expanding upon them in a way that unveils new dimensions to each and every song – stompers like I Wanna Dance become monolithic, while the likes of album highlights Living, Watching You and the title track feel intimate and hypnotic.

Over the course of our pre-show conversation, the pair discuss their approach to recording, production influences and the challenges of taking Reflections Of Youth on tour…

Where did you record the album?
Nick Rayner: We recorded in Pembrokeshire, South- West Wales in StudiOwz, which is a fairly vintage-focused studio with a control room, live room and a separate drum booth. It has a great selection of vintage drum kits, great mics and a lovely Cadac J-Type recording console.

How closely did the two of you collaborate on the recording and production process of the album?
NR: Anna Lena started the process with her demos, beginning the pre-production phases on her own, figuring out the direction she wanted to take the record and honing some ideas down. From there we pretty much jumped straight into the studio and started working on the rest together. Working on refining the sound, and seeing what we could do to take it further.

EERA: I’m lucky to work with Nick and also with my bandmate Allister Kellaway, since they both understand which specific sounds I’m trying to achieve. I try to get them as close as possible to where I’d like it to sound with my very limited gear at home before I bring all the ideas in to the studio.

How long did the whole process take?
NR: The album was recorded over maybe six months. We initially spent 10 days in StudiOwz in Wales, in two five-day runs where we were allowed constant access to the studio, so we weren’t running regular days and frequently went on until 2am-3am. After that we continued working on a few tracks out of my home studio in West Cork, Ireland.

Did you have a specific approach to recording the album as a whole, or did the process vary?
NR: We approached the record in a very open manner, with few preconceived notions. There was the foundation Anna Lena had laid, and from there all we had discussed was that we would like for the record to be as sparse as possible, every part to have a specific purpose and place and to try not to fill it with anything unnecessary. Each song did end up getting its own treatment; every time we started a new one all of the mics came down, everything was reset, and we started fresh. Then we focused on which drums would be right for this song, what kind of guitar sound we were going for, which amps we should we, whether to record the band live or track separately…

EERA: For this record I wanted to try to avoid adding too many layers of sound, and rather make sure that each part had a strong purpose for the song. Each song had a very natural development.

Were any songs particularly challenging or difficult in any way?
NR: The first thing we did when we started in the studio was to track Living, which we decided to go for with guitars and drums live together. Previously, we hadn’t had the opportunity to record the band in a live context and in some recording sessions both Anna and myself had struggled with really gluing the band sound together, but as soon as we finished Living it was very obvious what had been missing.

EERA: The majority of the recordings evolved quite naturally and easily. I brought in around 12 songs, where the purpose was to go with the ones we felt were the strongest. As soon as we started to record we quickly realised which ones to keep and which ones were the so-called throwaways.

Talk us through the main pieces of studio kit you used.
NR: Almost everything we did in StudiOwz went through the Cadac J-Type, a transformer-less British console, except a few things that went through some Neve 1073s and a Universal Audio 610 preamp. The core selection of mics we used were probably the Coles 4038 ribbons, Gefell UMT70 condensers, and some various vintage and modern dynamic mics. Everything found a place somewhere, for example the vocal on I Wanna Dance went through the 4038 as Anna’s voice was quite sibilant and we knew it was going to get sent through a bunch of distortion, so the ribbon helped smooth out the top end of Anna’s voice prior to the distortion.

One of our most used effects would have been a Roland Space Echo SRE-555, which is definitely one of my favourite delays. Quite often stuff got routed out to the space echo regardless of whether it was going to be delayed just to get some of the sound.

The main synth that we used on the track Wise Man was a Juno-106, we sent it to the space echo and overloaded the pres on it and recorded the wet signal of the tape delay, then moved it back in Pro Tools and muted the dry signal, you can also hear the tape splice on it.

Tell us about your sonic influences. Who are the producers that have shaped the sounds you look for in the studio?
NR: Before the recording we had discussed the work of PJ Harvey and John Parish, and I have always enjoyed John Congleton’s work with St. Vincent and Angel Olsen. But once we were in the studio, none of that came to mind and we just went with what we were feeling.

EERA: I never think of which producers I like. I rather think about which records I love the sound of and the all round feel of a record. I knew that I wanted to make an album that wasn’t too slick and that had a lo-fi feel to it.

As well as producing the album together you have also toured with Nick as FOH engineer. How beneficial is it to have the producer mixing the sound onstage?
EERA: This makes a huge difference. Nick knows exactly how we’d like the live sound to be, so it makes me and the band very relaxed, which creates a very positive atmosphere on stage. Nick also controls all the delay vocal effects I use throughout our set, which makes the performance a lot less stressful for me; one less thing to think about.

Will you continue working together?
EERA: Right now I’m focusing on writing as much as I can and getting the new demos ready. But the musical connection that Nick and I have is very strong, so I wouldn’t be surprised if we end up working together again in future.