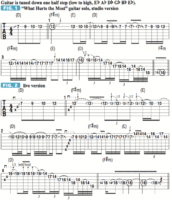 How to Make a Guitar Solo Sing

Last month, I discussed some of the differences between the studio and live stage environments. I cited the tune “What Hurts the Most,” which I recorded with Rascal Flatts for our 2006 album, Me and My Gang, as an example of a song whose arrangement has evolved over time to suit the concert setting.

As you recall, we looked at one of the main rhythm guitar parts and compared the differences between how I played it on the studio recording and how I now perform it live.

This month, I’d like to focus on the song’s four-bar lead guitar solo and detail how I’ve been inspired over the course of many shows to tweak it in an effort to make it connect with to a live audience.

FIGURE 1 shows the studio version of the solo, which is played over a repeating three- chord progression in F# minor and begins with a four-note pickup phrase that “walks” up the B string and ushers in a wailing whole-step bend on the first downbeat of the solo sec- tion. Notice how I stay on the B string for the first couple of bars, using reiterated notes in conjunction with vibratos and finger slides as expressive elements. It’s similar to the lyrical way that a picker like Willie Nelson might play a melody on a nylon-string acoustic, except here I’m doing it with a bright, high-gain elec- tric guitar tone and using bends, too. In bar
4, I hold and rearticulate a half-step bend on the high E string’s 16th fret, then wrap up the solo with a fast, blues-rock-type phrase played across the top four strings in the 14th-position F# minor pentatonic “box” shape, liberally adding pull-offs to get a smooth articulation. The solo was crafted with the intention of making it soulful and powerful and serve the song without being too over the top.

Now compare this to FIGURE 2, which shows the way I’ve come to play the solo live. It’s essentially the same melody, but you’ll notice that I’ve added more vibratos as well as some decorative grace-note “reverse bends” and muted-string rakes, all in an effort to make the solo wail and connect with the folks in the back row. I add a little bit of flash at the end of bar 3 by taking the original eighth-note triplet climb up the high E string and doubling its rhythm to a sextuplet with a Bach-like pedal point on the B string. The ascending melody notes are still there; they’re just alternating now with the B-string note. The overall result is a little more intensity and drama, all without losing the melody.

It’s all too easy to overplay when soloing, especially when you’re doing it over a power ballad like this while onstage and feeling the energy in the air and wattage behind you. I’ve been guilty of that in the past, and I’m sure many other players will admit to it as well. There is, of course, a time and place to cut loose, such as during an uptempo “barnburner” jam or perhaps during your unaccompanied solo spot at the front of the stage. But with experience, I’ve learned to exercise restraint when appropriate and edit my phrases and licks so that what I’m playing comes across as a memorable, vocal-like melody. The key is to maximize the melody the way a singer would, and to that end, sometimes simple goes a long way.