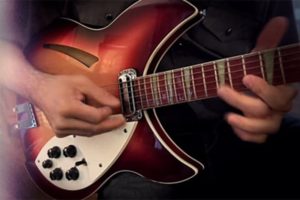 Last month we investigated the dark sound of the Phrygian mode, which is spelled intervallically 1 b2 b3 4 5 b6 b7.

In the key of E, the notes would be E F G A B C D. Four of the Phrygian mode’s seven scale degrees—the second, third, sixth and seventh—are minor, or “flatted,” intervals, which is what gives Phrygian such a foreboding, “evil” sound, one that is perfectly suited to heavy metal music.

Once you are well familiarized with the Phrygian mode, it’s fairly easy to learn its “evil sister,” the Phrygian-dominant mode. To morph from Phrygian to Phrygian-dominant, only one note needs to change: the minor, or flatted, third (G in the key of E) is raised one half step to a major third (G# in this case), resulting in the intervallic spelling 1 b2 3 4 5 b6 b7.

Fretting the scale in this position, I begin with my middle finger on E (A string, seventh fret), switch to my ring finger for the F note one fret higher, and use my index finger for both the G# and the A notes on the D string. This lets me fret the remaining notes on the top four strings by staying “in position,” with each finger assigned to a different fret. The only exception is on the high E string, where I shift my index finger from the seventh to the eighth fret and slide my ring finger from the eighth fret to the 10th.

FIGURE 4 is an improvised solo based mostly on E Phrygian dominant. In bars 1–4, I stick with melodies played in eighth and ninth positions and rely on many quick hammer-on and pull-off combinations between repeated notes to achieve a smooth, or legato, sound. I remain mostly in 12th position from bar 9 onward, again exploiting hammer-on/pull-off combinations as I transition from one phrase to the next.