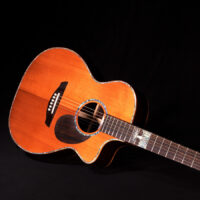 Faith Guitars are delighted to announce the release of the 20th Anniversary ‘THE TWENTY’ Legacy series guitars.

Based upon the acclaimed PJE-designed Legacy Series, the new 20th Anniversary Faith models are built to celebrate 20 years since the inception of the Faith Guitars project in 2002.

The ‘TWENTY’ models feature a torrefied Canadian Sitka Spruce top as used on all Faith PJE Legacy Series guitars, paired with the finest, booked-matched and premium-graded Indian Rosewood on the back and sides. Each model showcases a host of exceptional adornments unique to these limited-edition commemorative models, with their tops decorated with an edging of stunning abalone shell and edges and backs bound with richly figured solid Koa surrounded by expertly inlaid abalone.

The FG20’s celebratory pièce de resistance comes in the form of a uniquely designed and hand-inlaid Tree of Life inlay across the 11th, 12th and 13th frets. Each of the leaf sections is an individual piece of abalone, with the trunk section made of Mother of Pearl – designed and realised by Faith guitars artist, percussive fingerstyle guitarist and illustrator, Sean De Burca. (sdeburca.com)

The same A-grade abalone shell is also used for the headstock ‘Faith’ logo, which is complemented by the ‘Patrick James Eggle’ signature inlay, in recognition of Patrick’s own legacy of luthiery.

Onboard electronics are taken care of by Fishman Electronics and their Matrix-T-Blend pickup system: their finest offering, combining a condensor microphone and their incredible ‘MATRIX’ undersaddle pickup.