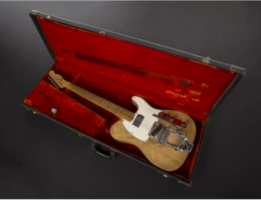 Julien’s Auctions has announced that the 1965 Fender Telecaster that Bob Dylan played during his infamous “electric” tour—where he played live with a backing band for the first time—will be heading to the auction block on May 19. The guitar—which was owned by The Band’s Robbie Robertson and later played by both George Harrison and Eric Clapton—is expected to fetch between $400,000—$600,000.

For his 1966 tour with the band known then as The Hawks (they would later change their name to The Band), Dylan used this Telecaster, which was owned by The Hawks’ guitarist, Robbie Robertson. Dylan would later use the Tele on his iconic 1966 album, Blonde on Blonde and on the legendary 1967 recordings that would be released eight years later as The Basement Tapes.

Robertson would later use the guitar on some of The Band’s most timeless songs, such as “The Weight” and “The Night They Drove Old Dixie Down.” It was played on stage during The Band’s performances at Woodstock, Isle of Wight, Festival Express, and at Watkins Glen, the record-breaking concert that featured the Allman Brothers Band, the Grateful Dead and more.

In 1970, Robertson stripped the guitar’s original black finish from the body. He also made other modifications to the guitar in later years, saying that they “seemed to give it a new life, along with a different creative surge.”

“This guitar has been on the front lines of so many phenomenal events, I gaze at it with amazement,” Robertson said in a press release. “When I think about all the creativity this guitar has been a part of, I’m still blown away.”

You can find out more about the auction over at juliensauctions.com. A portion of the proceeds will go to the American Indian College Fund.