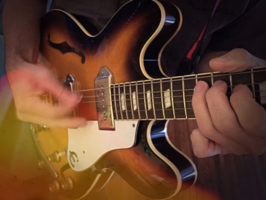 When learning how to play jazz guitar, one of the most important chord progressions you can spend time practicing room is the “turnaround.” Turnarounds often occur at the end of a tune, or a section of a tune, and they essentially are used to “turn the tune back around” to the top of the form or start of the next section. Hence the name.

When learning how to play jazz guitar, one of the most important chord progressions you can spend time practicing room is the “turnaround.”

Turnarounds often occur at the end of a tune, or a section of a tune, and they essentially are used to “turn the tune back around” to the top of the form or start of the next section. Hence the name.

Because they are so often used in the standard jazz repertoire, it’s important to not only be able to play the basic version of this progression, which you can see in the first example below, but it’s important to have at least a handful of variations you can use for these chords in order to keep things fresh and exciting.

In this lesson, we’ll be exploring five common variations of a two-bar turnaround progression, using tri-tone substitutions to build up and expand your options when comping and soloing over these common changes. To learn more about the techniques used in this lesson, check out “Chord Substitution vs. Chord Superimposition.”

In this first example, we’ll take a look at one of the most common turnarounds in jazz, the I-VI-ii-V turnaround. Since this is such a common way to turn around any tune or progression, we’ll use it as the basis for the other four turnarounds in this article, making slight adjustments and alterations to expand on this fundamental progression.

The thing to notice in the progression is that you have a D7b9 chord in the second half of the first bar, where you might be expecting a Dm7 chord, which is the diatonic vim7 chord in the key of F major. The reason you find a D7b9 chord there is that it is acting as a V7 of iim7 in this case, so D7b9 is the V7b9 chord of the Gm7 chord that follows, adding a “mini-cadence” within the longer two-bar turnaround.

Replacing a vim7 chord with a VI7b9 chord, when leading to a iim7 chord, is a common occurrence in jazz and so it is worth exploring further in the practice room.

The next turnaround we’ll look at uses the first variation in bar two, where you now have a Gb7 in place of a C7 chord to end the progression. This is referred to as a “tritone substitution,” where you are replacing the given chord, C7 in this case, with a chord located a tritone away from that root, Gb7 in this case. The reason that Gb7 can work in place of a C7 chord is twofold.

The first reason is that the Gb7 and C7 share the same 3rd and 7th intervals, they’re just switched around for each chord. The 3rd and 7th of C7 are E and Bb, while the 3rd and 7th of Gb7 are Bb and Fb (E), so they are the same notes just inverted. As well, the Gb7 then resolves to the Imaj7 chord, Fmaj7 in this case, by a half-step, which is a very strong resolution movement in jazz or any genre.

The next turnaround uses the same tritone substitution technique, but now applied to the VI chord in the second half of the first bar. In this instance, you are replacing D7b9 with an Ab7 chord, which is a tritone away from D7 and resolves by a half-step to the Gm7 chord at the start of the next bar. You can hear this progression used in the first four bars of the classic standard “A Foggy Day” if you want to see a real-life example of the I bIII ii V progression.

We’ll now use two tritone subs in the following turnaround, where you keep the Ab7 from the previous example, and now bring in a tritone sub in the first half of the second bar where Db7 is replacing Gm7. Now, you’re probably thinking, “But Db7 and Gm7 don’t share the same 3rd and 7th. How does this work?”

You’re right in thinking that Db7 and Gm7 don’t share the same 3rd and 7th intervals. But the movement of Db7 to C7 by a half-step is a strong resolution point, and Ab7 is the 5th of Db so that movement of a 5th into the Db7, the out of it by a half-step, is a strong progression that works well as a turnaround. Try it out on the guitar to see how it sounds. It might be more “outside” than you’re used to hearing with a normal turnaround, but it’s a cool sounding progression nonetheless.

The last turnaround will build on the previous example, where you used two tritone subs to expand the progression, by adding in the tritone sub for the C7 chord, Gb7, in the second half of bar 2.

You now have a tritone sub being used for every chord but the Imaj7 chord that starts the turnaround. And, when you look at the chords Ab7-Db7-Gb7 in a row, not only are they a series of tritone subs that resolve by a half-step between Gb7 and Fmaj7, but they also form a cycle progression as each chord is the V7 of the next chord.

Check out the tune “Lazy Bird” for an example of this root movement in a musical example, though in that case the bVI is a Maj7 chord, but you can hear the root movement being used over a standard tune nonetheless.

Now that we’ve looked at each of the five different turnarounds in this article, here are a few pointers on how to practice them in order to make the most out of your time in the woodshed.

• Repeat this process by pairing the first and third, first and fourth then first and fifth turnarounds

• Pick a tune you know that has a turnound, then each time you reach this part of the tune practice using all of the five examples above to take them to a practical, musical situation

What’s your favorite turnaround to use in your jazz guitar playing? Share your thoughts in the comments section below.

Matt Warnock is the owner of mattwarnockguitar.com, a free website that provides hundreds of lessons and resources designed to help guitarists of all experience levels meet their practice and performance goals. Matt lives in the UK, where he is a senior lecturer at the Leeds College of Music and an examiner for the London College of Music (Registry of Guitar Tutors).