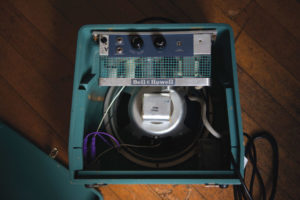 For Tube Goldberg, Turning Vintage Radios and Movie Projectors Into Fire-Breathing Amps Is All in a Day's Work

If you ever find yourself on the quest for a tube amp with authentic vintage tone, look no further than the combos built by Tube Goldberg, a small company based in Portland, Oregon.

The name is a sly reference to Rube Goldberg, the 20th-century cartoonist/inventor who dreamed up deviously complex contraptions, including the self-operating napkin. That said, these Tube Goldberg combos are anything but convoluted; they’re high-quality boutique amps that just happen to be made out of relics of a bygone era—movie projectors, record players, intercoms, reel-to-reel tape players and antique radios—most of which are from the Fifties or earlier.

The following conversation is with Chris Dugan, the brains behind Tube Goldberg. For more information, contact him at tubegoldberg@gmail.com or via Instagram (@tubegoldberg).

How do you decide what to put into a particular vintage item? Does each one “speak to you”?

Definitely. I want the finished product to look like a well-used prototype that never made it to production, so I let that idea inform my decisions. I try to be minimally invasive, only drilling holes where necessary, using visible parts of the same brand/era and preserving the patina.

Each amp is unique, of course, but is there a common thread?

Touch-sensitivity. They’re like candlelight in an incandescent world. The way they translate dynamics is what makes them special. They tend to have bright, sparkly cleans when played softly, but they’re by no means wimpy. Push them and they’ll breathe fire. The amps I like best are the ones that break up the earliest—but some people don’t want that. I have a few that will play crystal-clear up until your ears bleed.

Where do you get the parts—the “future amps”—from?

Estate sales and Craigslist. Portland has a ton of great junk stores too, including Really Good Stuff. Then there’s eBay, which is a good place to learn about what exists—but there’s not a lot of bang for your buck. With something like a speaker cabinet, the shipping can be the most expensive part. Many of the things I’ve lusted after on eBay I’ve stumbled upon in person for cheaper and in better shape.

Do you use any new parts, new speakers?

I try to be a purist—and I almost always am. I haven’t had to use new speakers, but I have used replacement vintage speakers when the original has been beyond repair. I’ve also used new capacitors, resistors and potentiometers.

Where can people find your amps in the flesh—and how much do they cost?

I hang my hat on the fact that these amps are made of repurposed materials, and I’m excited about bringing these things to life and out of the scrap heap. The reason these amps still breathe fire after the better part of a century is that they were extremely well-built in the first place. Plus, each amp is one-of-a-kind and has a unique story. They’re steeped in history, but they’re also optimized for guitar, serviced and updated to modern safety standards.