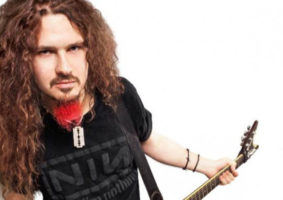 During his career, Dimebag Darrell was never shy about giving credit to the great artists who influenced him along the way.

From the bands themselves, such as Kiss, Judas Priest, Iron Maiden and Black Sabbath, to guitar legends Randy Rhoads, Eddie Van Halen, Pat Travers and Jimi Hendrix, Dimebag was as passionate as a fan as he was a performer.

He even got a tattoo of Ace Frehley (which the Kiss guitarist would later sign for him) on his chest.

In addition to this, though, he cited many of his contemporaries as a source of inspiration. However, to some it might still come as a surprise that in the late Eighties, around the time of Pantera’s “Power Metal” era, Dimebag often covered songs on stage by fellow guitar virtuoso Joe Satriani.

In the 1988 fan-shot video clip below, watch Darrell (Diamond in those days) play though around a minute of “Crushing Day,” which can be found on Satriani’s Surfing with the Alien.

This was apparently a regular part of the set during the band’s ’88 tour, with Dime also incorporating elements of “Echo” (also from Satch’s aforementioned 1987 release); however, any footage of this has yet to be seen.

Jonathan Graham is an ACM UK graduate based in London studying under the likes of Guthrie Govan and Pete Friesen. He is the creator of ForgottenGuitar.com, a classic-guitar media website, and is completing his debut album, Protagonist, due for release in 2016. Updates also can be found at Graham’s YouTube channel.