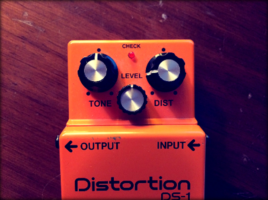 Four Ways to Mix Distortion and Modulation Without Sounding Like Mud

Modulation is a pristine effect. It’s subtle, not overly aggressive and best employed when it doesn’t substantially alter your raw tone. Distortion is different. While often loud and aggressive, distortion warps your signal, completely changing the demeanor of your sound. So the question is this: Can the two get along?

Modulation is a pristine effect. It’s subtle, not overly aggressive and best employed when it doesn’t substantially alter your raw guitar tone.

While often loud and aggressive, distortion warps your signal, completely changing the demeanor of your sound.

So the question is this: Can the two get along?

Specifically, can we use them at the same time without sounding like a chaotic mess? I don’t suppose anyone should say it’s not possible, but what can we do to make it sound palatable?

First, we should define modulation.

In the world of signal processing, modulation is simply the variance of a periodic waveform. In the world of playing guitar, that translates to the following effects:

The wave variance is most evident in the phaser effect, as you can hear the sound move over top of your amp’s raw signal with relative clarity.

In other words, it’s a saturating effect that changes the flavor of your tone. The same can be said of distortion, which is what makes combining them so tricky.

But when done right, it can sound really good, which makes understanding a few best practices worth the effort. So with a working definition of modulation, let’s look at how to best combine these two effects.

1. Govern the sharpness coming out of your amp’s three-band EQ

It’s not always necessary to have a thick or bass-heavy tone coming from your amp, but if you add distortion and modulation to an already high or piercing tone, it’s going to overload listening ears.

You ought to aim for a relatively benign or “garden variety” amp configuration to preclude your dual use of effects. I’d recommend going with the six-five-four (on a scale of one to 10):

That should give you a full, yet balanced, raw tone.

Avoid tuning in reverb; if you have a presence knob, set that between 4 and 7.

2. If possible, employ your amp as the primary gain source

Distortion is simply the addition of gain to your signal.

When combining with other external effects, you’re better off to dial in gain as part of the single coming from your amp, before you add anything else to it. Most professionals get their distortion from an amp instead of a pedal.

If you’re lucky enough to have an amp with a good distorted tone, dial in gain there instead of from a pedal. If you have to use a pedal, or if you simply prefer your pedal’s sound, make sure to place it after your modulation effects in your effect’s chain.

Good practice for adding effects to distortion is to find your preferred distortion level (gain level), then for every effect you add, drop the gain (distortion) knob by three. Because common sense dictates that we need to cut down the intensity of our distortion to make room for the added presence of the chorus, phaser or whatever modulation effect we decide to combine it with.

This is why heavily saturated distortion is sometimes a tough sell. It leaves no room for anything else.

Think of your tone as a physical piece of real estate, with limited space, that needs to be allocated and divided up amongst you guitar, amp and effects. A pie graph makes for a workable example:

Ideally, an effect should never be outworking or covering up the tone of your amp or your guitar. So to apply this concept, let’s whip up some settings for the Boss DS-1:

Match your volume level with whatever your amp is set to. Perhaps just a little bit louder. Remember, we still want our tone to be primarily shaped and dictated by the amplifier.

If the gain isn’t too hot, it will give the modulation a little more room to breathe. Out of the two, your distortion should serve as a background to the modulation, both of which should come together as a backdrop for everything else.

In other words, your distortion should take the back-most seat.

4. Slow the speed of your modulation effect

Chorus, flanger, phaser and tremolo pedals all have this in common; they have knobs that control speed.

Sometimes it’ll be called something different. For example, on the Boss CE-5 Chorus Ensemble it’s listed as “RATE.” But it always means the speed at which the effect cycles through each wave and how quickly you hear the effect play all the way through.

When your speed is high, particularly on chorus and phaser effects, it can just sound messy. Add distortion and you’re going to get tagged with the “hiding behind effects” label pretty quickly.

So while there’s a lot of freedom with modulation, I’d advise to keep the speed down pretty low, so that it’s hard to tell how often the effect is cycling through and so as to avoid beat or timing conflicts. Think around 9 or 10 o’clock for that knob.

That’ll give you a smooth blanket of flavor over your distortion and under the tone of your amp and guitar.

And sometimes it just takes getting used to the cadence of the right gear. For me that’s the Boss DS-1 and CE-5. For you, it might be different.

Let me hear about it, settings and all.

In the meantime, good luck with your pedal mixing!

Robert Kittleberger is the founder and editor of Guitar Chalk. You can get in touch with him here, or via Twitter, Facebook and Google Plus.