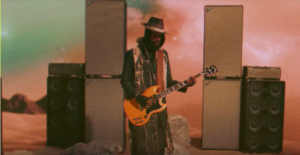 Gary Clark Jr. has released the music video for his heavy, appropriately bluesy version of The Beatles’ “Come Together.”

The song—Clark’s contribution to the soundtrack of the upcoming DC/Warner Bros. film, Justice League—was produced by Junkie XL, Mike Elizondo and Sam de Jong and recorded at The Village Recorders in Los Angeles.

You can see the action-packed video for yourself below.

Speaking to Guitar World back in May about his evolution in the studio, Clark said “I’m getting more comfortable in that environment. I’m beginning to enjoy the process of having an idea and letting it develop and evolve organically.”

“I’ve really started acquiring the strength to follow my own instincts, rather than being persuaded or tempted to listen to outside opinions,” he continued. “I’m more confident and less prone to go down that rabbit hole of darkness and doubt, which has happened to me multiple times.”