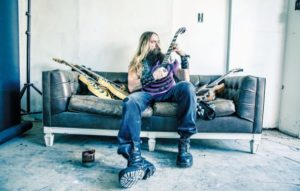 'Grimmest Hits': Zakk Wylde and BLS Serve Up a Collection of Radio-Unfriendly Loudness on Their New Album

You’ve got to give Zakk Wylde this much—he can never be accused of overhyping himself. When asked if his latest Black Label Society album, Grimmest Hits, is a greatest hits set, he scoffs, “No. That would imply that I had the one essential ingredient for a greatest hits album: hit songs.”

He recounts a phone call he received from one of his record label reps when he was cutting the album. The exec asked, “Are there any hits?” Wylde let out a sad sigh and said, “I don’t think so. It’s looking rather grim.” Just like that, the album’s title was born, and the guitar star thinks it makes perfect sense. “This way, when somebody listens to the record and says, ‘I don’t hear any hits,’ I’ll go, ‘Exactly, jackass. That’s why it’s Grimmest Hits and not Greatest Hits.’ ”

Despite Wylde’s low-key selling approach, Grimmest Hits is one of his strongest BLS releases yet, packed with punishing, end-of-days metal and poignant, Southern rock–flavored ballads. The Black Label gang has been through numerous iterations since Wylde formed the outfit 20 years ago, but the current lineup—longtime bassist John DeServio, along with relative newbies, drummer Jeff Fabb and rhythm guitarist Dario Lorina—clicks like a Swiss watch on the new album. “We get on great,” Wylde enthuses. “There’s no pressure or drama. I tell ’em, ‘I’m making a new album. Are you in?’ I like to keep things loose in the studio.”

Rifftastic rockers like “Trampled Down Under,” “Room of Nightmares” and “Seasons of Falter” form the backbone of Grimmest Hits, and Wylde stresses that the key to their power lies in their simplicity. “Great riffs shouldn’t be complicated,” he says. “Whether I’m writing for Black Label or back when I was coming up with stuff like ‘No More Tears,’ it all comes from what I learned at the University of Tony Iommi. All you need is a few notes played in the right combination. You’ve got ‘Iron Man’ or Ritchie Blackmore doing ‘Smoke on the Water’—they’re just a few notes, but they’re the right notes.”

Wylde dials the brutality down on lush, mid-tempo cuts such as “Nothing Left to Say” and “The Only Words,” which reflect his ongoing affection for the Allman Brothers Band and other staples of classic rock. “When I make a record, it’s like I’m making a soup of everything I’m listening to,” he observes. “With those songs, you dip a spoon in the soup and say, ‘I’m tasting some Allmans, and there’s a little Black Crowes, a little Stones…’ And then I’ve got some Purple, some Zep and Sabbath in the rest of the thing. That’s a nice recipe.”

On tunes both sinister and sensitive, Wylde’s choice of guitars are all from his line of signature Wylde Audio models (“I’ve got the Barbarians, the Odins and the Warhammers”), each one fed into one of his Wylde Audio Master 100 heads. “I use the same amp no matter what kind of song I’m doing,” he says. “If I need some grit, I just fire up the volume and let it rock, and if I need some clean stuff , I turn the guitar down and I get a nice liquidy tone. And with the Wylde Audio guitars, I can go from a full-on humbucker to a single-coil, so I don’t have to switch guitars. It’s all good.”