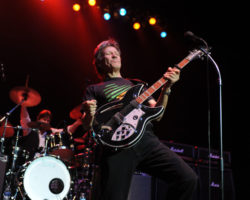 Hear "Compared to What," a Rocking Slice of Newly Unearthed Classic Steppenwolf

Canadian-American classic-rock legends Steppenwolf will release Steppenwolf at 50, a new career-spanning 3CD set, March 16. The 41-song collection contains four previously unreleased tracks from frontman John Kay’s vault, including a rocking cover of “Compared to What,” a 1969 Gene McDaniels composition that became a hit for Les McCann and Eddie Harris. You can check it out below.

“A couple of tracks on this collection were never released before now, and hearing them after all these years brought back lots of memories,” Kay tells us. “’Compared to What’ is perhaps my favorite ‘new’ track, particularly because of its relevance in the here and now.”

The set also includes an unreleased version of “From Here to There Eventually” (plus “Labor of Love”) and covers Kay’s solo material. The liner notes were written by Kay, who curated and A&R’ed the album with his longtime manager, Ron Rainey. The album cover, which you can see below, is a slightly modified version of a 1969 Steppenwolf tour poster.

The band—now known as John Kay & Steppenwolf—is adding several new shows this year, with all proceeds going to the 14 animal care-related NGO’s Kay has supported over the years.