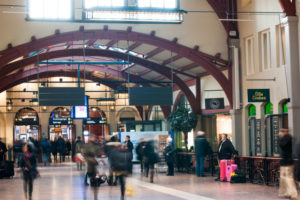 Renkus-Heinz has deployed its Iconynx loudspeakers at one of Sweden’s busiest railway stations.

Installers Soliflex Svenska AB was appointed to undertake a loudspeaker upgrade at Gothenburg Central Station, covering the primary public spaces of the station which serves more than 27 million passengers each year.

The new set-up draws on a total of eight IC8-RIIs, each featuring eight 4-inch coaxial transducers with three HF tweeters, eight amplifier and DSP channels, and beam control down to 800Hz.

Fredrik Setterberg, audio lead and programmer at Soliflex, said: “The tests showed that there were some very uneven STIPA values, so we went on to build two EASE models and experimented with numerous different column speakers and placements in order to produce a solution that would guarantee consistent coverage everywhere. After careful consideration of the various available brands, we concluded that Renkus-Heinz Iconyx digitally steerable line arrays would be the ideal fit.”

Logistical considerations also added to the challenge. “In one of the halls, the nature of the building was such that the loudspeakers could not be positioned where we wanted them,” added Setterberg. “But thanks to the beam-steering capabilities of the Iconyx loudspeakers, we have been able to deliver the sound exactly where it is required – in other words, to where the passengers are waiting or walking. We will continue to do some fine-tuning to the system, but the improvement has already been dramatic.”