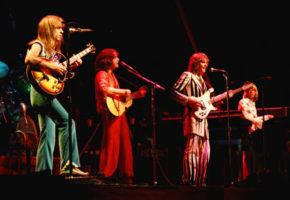 Here’s another one from the “fun with isolated tracks” files!

While the bass line pure genius, it is pretty straightforward in its isolated form. What’s truly fascinating is how Howe’s various guitar parts—played on various guitars—were spliced together into the final track, thus creating a one-of-a-kind musical performance.

Howe mingles acoustic and electric figures, finishing things off with a series of furious electric runs and an atonal solo that doesn’t adhere to traditional rock forms.

“Certainly what I felt I was doing was bringing that guitar sound, the Martin 00-18, right to the front of the group, which was not something that I knew would work,” Howe said in 1998. “I wondered how much could I play acoustic guitar in a rock band. I’d done it with ‘Clap’ and ‘Starship,’ and little bits on ‘Yours Is No Disgrace.’ My goal on ‘Roundabout’ was to make the acoustic a feature instrument.”