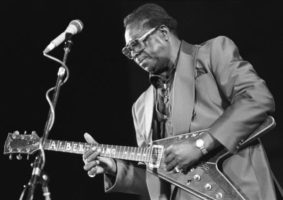 How to Build a Guitar Solo Using Thematic Development

Last month, I introduced the concept of theme and development as a means to devise musically engaging and memorable single-note solos.

Our approach entailed setting up a specific melodic phrase and then exploring different permutations of it, via alterations such as octave displacement, shortening or lengthening the phrase, and repeating it but starting on a different beat or from the middle of the phrase. Each approach lays the groundwork and provides the impetus for a variety of complementary phrases that may be used to build a musical “story” throughout the solo.

Applying the same approach we had taken in the previous column, all of the solo phrases presented here are played over a medium-tempo funk groove on an E7#9 chord and are based on the E minor pentatonic scale (E G A B D). As we are playing over an unchanging, or static, chord, the notes that will have the strongest “pull” are the chord tones of E7#9: E (the root), G# (the major third) and B (the fifth).

The raised, or “sharped,” ninth (#9), G, which may also be thought of as the minor, or “flatted, third (f3), sounds good too. The other two notes in E minor pentatonic, the fourth, A, and D, the minor, or “flatted,” seventh (b7), tend to sound unresolved, like they need to resolve to one of the other chord tones.

FIGURE 1 introduces a one-bar, Albert King–style phrase. The strong notes are the initial G (the minor third), B (the fifth) and the E root note. In bar 2, the lick is moved down an octave, and in bars 3 and 4, it’s played in the same octave as bar 2 but is progressively moved over to the adjacent higher strings, with the notes located lower of the fretboard. Notice that the higher the string, the brighter the tone, which is a valuable consideration to be aware of when crafting a solo. In bars 5 and 6, the lick is moved down through two additional octaves, respectively. A slight alteration in the phrase is necessary in bar 6 to accommodate playing it on the sixth string.

An effective way to develop this idea would be to transform it into a two-bar phrase, as illustrated in seven different permutations in FIGURE 2. I begin with the same exact phrase as bar 1 of FIGURE 1, and in bar 2 I “answer” that initial line with a complimentary phrase. In bars 3 and 4, the idea is moved down one octave and over to the G and D strings. Throughout the next four bars, the lick progressively moves to adjacent higher strings and is played lower on the fretboard, with subtle changes in the phrasing to keep the line interesting rhythmically and melodically.

The final incarnation is shown in bars 14 and 15, with the lick played in first position, utilizing the open G string. At the end of the phrase, I bend the string behind the nut, à la Jimi Hendrix or Jimmy Page, in order to raise the note’s pitch and give it some decorative vibrato.