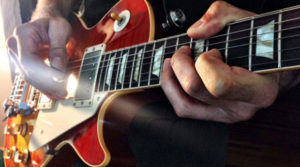 Students have often asked how I go about building creative, interesting rhythm parts when playing over a repeating one- or two-chord vamp.

As touring guitarist for Great Southern, the group formed by Allman Brothers Band founding guitarist Dickey Betts, I’m required to lay down musical rhythm parts behind extended solos on songs like “Blue Sky” and “In Memory of Elizabeth Reed,” and it’s a challenge to craft supportive rhythm parts that will both enhance the power of the soloing instrument while also locking in with the rhythm section to drive the groove along.

This month I’d like to address this worthwhile topic.

A technique I often rely on is to take an unusual chord voicing and then move similar voicings up and down the fretboard on the same group of strings. I do this by using a specific mode as the basis for connecting each chord tone in each voicing to the next. To illustrate, I’ll use the A Dorian mode (A B C D E F# G) to formulate improvised, chord-based rhythm parts. FIGURE 1 illustrates A Dorian played in third-fifth positions. Play this pattern up and down several times to memorize its structure and become familiar with the mode’s sound and musical quality. FIGURES 2 and 3 offer examples of soloing “freely” through A Dorian in these positions, so play through these examples and then try inventing some of your own soloing patterns in different areas of the fretboard.

The Dorian mode is spelled intervallically 1 2 b3 4 5 6 b7. It’s essential that you recognize the quality of each interval, or scale degree, as it relates to the root, or tonic. I suggest playing each interval—the second, third, fourth, fifth, and so on—against the low A root note (more on that in a moment).

FIGURE 4 illustrates an unusual Am13sus4 chord voicing that’s based on the A Dorian mode and built from stacked fourths. The voicing is structured by combining a series of notes, each of which is located four scale degrees above the previous one. Starting from A, D is a fourth above A; G is a fourth above D, C is a fourth above G; and F# is an augmented, or “sharped,” fourth above C. We have to use F# instead of F here for the sake of staying true to A Dorian, which is the whole point of the exercise.

Now let’s move A Dorian over to the G string, as shown in FIGURE 7. Again, it’s very useful to play each note in this pattern simultaneously with the open A string, as demonstrated in FIGURE 8. Notice that I included articulation devices, like finger slides, to help smoothly connect the notes of the mode as you move along the string.

Now let’s go back to our stacked-fourths chord voicing of Am13sus4. To create a series of chords based on A Dorian that maintains the stacked-fourth structure, simply move up to each successive scale degree on each string when moving from one chord voicing to the next, as demonstrated in FIGURE 12. When moving from the first chord, Am13sus4, to the second chord, A7sus4, the open D note moves up to the next scale degree of A Dorian, E at the second fret; the open G note moves up one scale degree to A; the C on the B string’s first fret moves up to D at the third fret; and the F# on the first string’s second fret moves up one scale degree, to G at the third fret. This process is then repeated when moving to each higher chord voicing in the series. Some of these voicings may be unfamiliar to you, so take the time necessary to memorize the forms as well as how one changes to the next as you move around on the fretboard.

Trying to memorize numerous chord voicings and shapes across the entire fretboard is a tall order and can seem overwhelming. A good way to go about this is to first focus on small areas and particular strings groups. I like to take groups of four consecutive voicings and create repeated rhythm parts. This way, I can study the concept across smaller and very specific areas of the fretboard at one time. FIGURES 13-15 offer examples of rhythmically syncopated ideas that are designed to help you to master switching from one stacked-fourth voicing to the next. Once you have the concept down, try starting with a variety of chord voicings based on A Dorian and then move these voicings around the fretboard in the same fashion. There are endless variations to be discovered.