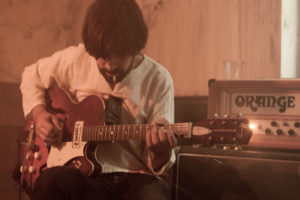 How to Find Your Own Guitar Sound, Regardless of Genre

There’s no set path for a guitarist to find his own sound. Finding your own signature and take on what has come before will always be a subjective and personal endeavor.

There’s no set path for a guitarist to find his own sound.

Finding your own signature and take on what has come before will always be a subjective and personal endeavor.

Here’s a short list of things I’ve managed to learn over the years, things that have helped me develop a sound and style I can call my own.

In this age where every guitarist seems to have a mammoth pedalboard taking up some serious real estate at their feet, I find many young players feel they must invest a small fortune on pedals and equipment. As long as you have a somewhat decent guitar and amp, you’re ready to start creating.

I’m not dismissing how cool certain pedals can sound and their usefulness in kicking out some killer tones. I’m simply saying that your favorite guitarists will most likely sound like themselves no matter what they might be playing out of. Besides, working with limitations and striving to get past those limitations often will push you to develop in new and interesting ways.

The Beatles recorded Revolver on four tracks. Robert Johnson has nothing but an acoustic guitar and a slide. Their limitations pushed them to develop all sorts of new techniques and sounds.

Developing your own sound doesn’t necessarily mean you have to come out of left field with something absolutely unheard and new. There are no new emotions. Often, it’s a matter of altering what came before just enough so that you can once again tap into that emotion.

Whatever you might be into, there’s most assuredly a long chain of guitar players who have helped to shape the way you play. You don’t have to forget these guitarists or pretend they don’t exist. It’s a question of putting together your various influences and adding to it. I don’t mind a guitarist who wears his/her influences on his/her sleeve, as long as he or she is adding something to it or changing it in some interesting way—and not simply copying.

Not to get too deep, but creativity and the act of creation continually blow my mind. In some ways, it’s the very apex of humanity and being human. Whether you are a physicist or a guitarist, the great ideas (or riffs) often seem to drop out of the sky.

Many times it seems to be more a matter of being open and ready to receive the ideas that come than a forcible act of creation. Jump up and take advantage of these inspired ideas when they come. Keith Richards woke in the middle of the night with the opening riff of “Satisfaction” running through his head. He promptly sat up and recorded it before falling back to sleep.

If what you’re playing sounds powerful and you’re exciting to be playing it, then that’s what you should be playing. Don’t worry about what anyone else is doing. You have to be your first fan. Basing your playing on what you think other people like misses the whole point and more importantly, it isn’t very fun.

This one is a “no-brainer,” but there’s simply no way around putting in the playing time. Spend time playing by yourself and playing with anyone around who wants to jam. It’s important to do both. Learn your favorite songs, try writing some of your own, or just noodle around on the guitar while you’re hanging on the couch. It will help. The more you play and mess with different ideas and styles, the more you’ll start to carve out a niche for yourself.

Jason Simon is the guitarist/vocalist in Dead Meadow. For more about the band, visit deadmeadow.com and their Facebook page.