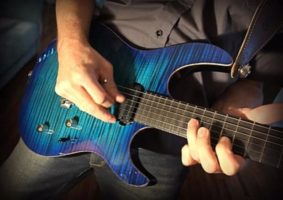 How to Incorporate Finger Slides and Legato Techniques into Intricate Phrases

Over the last few columns, I demonstrated a variety of ways that I like to incorporate legato articulation—finger slides, pull-offs and hammer-ons—into the signature riffs and solo phrases I play in the music of Periphery and Haunted Shores.

I find that employing slides to move from one fretboard position to the next in the middle of a phrase can greatly alter the sound of it, as well as influence the notes that I choose to play. The results can often be totally unexpected and surprising, as playing the same notes but in different areas of the neck can serve to inspire new and different melodic ideas.

FIGURE 1 is an exercise I developed in order to practice the approach and technique of using slides repeatedly and on different strings throughout a melodic phrase. Played in the key of E minor, this repeated passage is based on the E minor pentatonic scale (E G A B D) with the inclusion of the second, or ninth, F#.

Another important element here, besides the slides, is the use of the open G and high E strings. I begin with my ring finger on the high B note (first string, seventh fret) that slides down to the third fret and is then pulled off to the open string. I then slide up from D to E on the B string with my middle finger and then sound the open high E string again, followed by a slide down the G string from the fourth to the second fret, using my index finger, followed by a pull-off to the open string.

Repeatedly changing the direction of the slides during a lick like this is another technique that lends an unexpected sound to the phrase. The middle finger is then used to slide up from E to F# on the D string, followed by the open G note, and then the pinkie is used to slide from E to G on the B string, setting up the use of the ring finger to begin the two-bar pattern again in bar 3. Play the whole repeating section as many times as you like, starting out slowly and focusing on making every note sound, clean, even and confident.

A good example of the inspiration that was generated by this exercise is the riff to the pre-chorus of the song “Priestess,” from the Periphery album Juggernaut: Omega.FIGURE 2 illustrates this riff, which is essentially a four-bar phrase that has two different endings; after playing the initial four bars, the first three are repeated, and then bar 8 offers a slightly different melody.

Across the first two and a half bars, I’m essentially arpeggiating a C(#4) chord, once again incorporating the open G and high E strings. In bar 2, I quickly slide up to the 12th fret but then immediately slide back down to the fifth fret by the end of the bar. Implementing the factor of “movement” in the execution of the lick dramatically alters the sound and musicality it evokes.

Another important element here is that the use of open strings allows certain individual pitches to ring simultaneously, which was very deliberate. Sounding multiple strings in this way yields the effect of strumming a chord without actually doing so. Now that you have the idea, try inventing some of your own lines that incorporate these techniques.