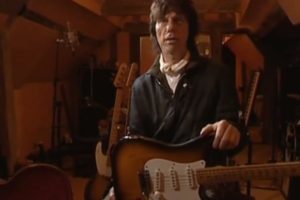 Fans of Jeff Beck—and of vintage gear in general—might get a kick out of the video below.

In the nearly 15-minute-long clip, which appears as bonus content on Beck’s 2011 Rock ‘n’ Roll Party DVD, Beck shows off some of his favorite guitars.

These include a worn-in Fender Telecaster with humbuckers (which he got from Seymour Duncan), the Fender Strat he got from John McLaughlin, an original Gretsch Rancher, a 1954 Telecaster (which he plugs in and demos), a 1956 Gretsch Duo Jet and more.

This is, of course, the same Duo Jet Beck used on his 1993 Crazy Legs album (a tribute to Gene Vincent and Cliff Gallup) and at the 2010 Rock ‘n’ Roll Party Les Paul tribute show at the Iridium in New York City.

Note: In the video, it seems Beck misidentifies his Gibson ES-175 as a Gibson L5. Just pointing it out! Hey, it could happen to anyone.