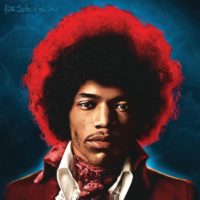 Jimi Hendrix Jams with Johnny Winter, Stephen Stills and More on a New Album, 'Both Sides of the Sky'

The blues loom large on the latest set of Jimi Hendrix studio outtakes, being released by the Experience Hendrix team of Eddie Kramer, John McDermott and Janie Hendrix on March 9. Titled Both Sides of the Sky, the 13-song set is being marketed as the third installment of a posthumous trilogy that also includes 2010’s Valleys of Neptune and 2013’s People, Hell and Angels.

The music on this new release spans the period between January 1968 and February 1970. This was a time of dramatic transition for the iconic guitarist, as the Jimi Hendrix Experience splintered and the trio’s leader went on to experiment with several new musical ensembles, perhaps most notably the Band of Gypsys with Hendrix’s army buddy Billy Cox on bass and drummer/vocalist Buddy Miles, popular at the time for his work with Mike Bloomfield’s band, the Electric Flag, and the Buddy Miles Express.

Given that 12-bar blues had become the lingua franca of jamming rock musicians by the late Sixties, it isn’t surprising that Hendrix assayed the Muddy Waters classic “Mannish Boy” for his first session with the Band of Gypsys lineup on April 29, 1969. The uptempo arrangement, heard here for the first time, showcases Hendrix’s innovative, free-handed approach to traditional repertoire.

Along the same lines, a previously unreleased recording of Guitar Slim’s standard “Things I Used to Do” finds Hendrix teamed with fellow Sixties blues guitar icon Johnny Winter, with Cox on bass and Crosby, Stills and Nash drummer Dallas Taylor behind the kit.

Both Sides of the Sky also brings to light more studio recordings Hendrix made with his good friend Stephen Stills, notably a pre-CSN recording of Joni Mitchell’s song “Woodstock” from September 1969, with Stills on lead vocal and organ, Hendrix on multi-tracked guitars, Mitch Mitchell on drums and Duane Hitchings of the Buddy Miles Express on piano.

Items like these, not to mention another track featuring vocalist/sax player Lonnie Youngblood from Hendrix’s pre-fame group Curtis Knight and the Squires, lend historic interest to the set. However tentative and unfinished, these tracks shed light on the creative cross-currents of the counterculture Sixties.