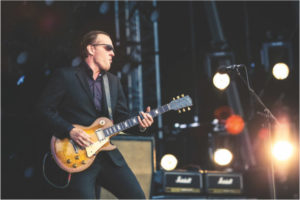 Joe Bonamassa will release British Blues Explosion Live, a new DVD, Blu-Ray and CD (vinyl too, by the way), May 18 via J&R Adventures. The release represents the guitarist’s live tribute to his main British six-string heroes, Eric Clapton, Jeff Beck and Jimmy Page.

The performances were shot and recorded during Bonamassa’s July 7, 2016, performance at Greenwich Music Time at the Old Royal Naval College in Greenwich, London, part of his all-too-brief 2016 “British blues explosion” tour of the U.K.

In the video below, you can watch Bonamassa and his band—Michael Rhodes (bass), Reese Wynans (keyboards), Anton Fig (drums) and Russ Irwin (guitar)—play bits of Clapton’s “Mainline Florida” and “Pretending,” plus Led Zeppelin’s “How Many More Times.” That night, the band also performed Beck’s “Plynth (Water Down the Drain)” and “Spanish Boots,” Led Zeppelin’s “Boogie with Stu” and “I Can’t Quit You Baby,” Cream’s “SWLABR” and John Mayall and the Bluesbreakers’ “Double Crossing Time” and “Little Girl.” You can see a complete track list below.

“If it weren’t for certain British musicians of the early Sixties, the blues may very well never have exploded into rock music as we know it today, and indeed may have passed into history,” Bonamassa said in a press release.

Ry Cooder’s original heavily modded “Coodercaster” Strat is up for sale for $150,000