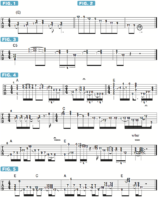 One of the most important aspects of becoming a competent, well-rounded and in-demand guitar player is a dedication to the art of rhythm guitar playing.

This is something that doesn’t get addressed nearly enough within instructional parameters, and I believe that is because it can be more difficult to practice rhythm guitar than it is to practice soloing techniques.

All guitar players love to play and practice licks, solos and scales all day long, but having the discipline to practice rhythm guitar is another matter entirely. For me, the study and appreciation of the art of rhythm guitar was greatly inspired by the music of Jimi Hendrix.

Jimi himself had been a keen student of the R&B/soul rhythm playing of guitarists such as Curtis Mayfield, Ike Turner and Steve Cropper, all of whom had devised creative ways to fill out musical arrangements with small chord voicings, voice leading techniques and an overall sense of melody.

Just a cursory listen to Jimi’s “Castles Made of Sand,” “Little Wing” or “Bold As Love” tells you all you need to know about his brilliance as a trailblazing rhythm guitarist. Let’s say, for example, you had a chord progression of E to C to A and you wanted to spruce it up with some little connecting passages. The overall approach is to put together a major pentatonic-based “toolbox” and apply elements of major pentatonic to each of the chords.

In FIGURE 1, my index finger is barred across the A, D and G strings at the ninth fret, and I use my ring finger to hammer-on to the 11th fret on the A and D strings, creating the sound of E/G# along with a quick reference to A/C#. The notes that are accentuated here are the second, third, fifth and sixth of E, and all of those intervals are found within the E major pentatonic scale, as illustrated in FIGURE 2.

I will use those pitches for chordal improvisation when playing over the E chord. When I switch to the C chord, I’ll use the notes of C major pentatonic—C D E G A—to create two-note harmonies to embellish the sound of C major. The same approach can be applied to the A chord, using A major pentatonic—A B C# E F#—played similarly in harmonized two-note pairs, as shown in bars 1 and 2 of FIGURE 4.

In bar 3, I switch back to E and shift down to the lower area of the fretboard, followed by a return to ninth position, as demonstrated in FIGURE 1. Bar 5 features a return to C and more chordal embellishment based on C major pentatonic.

In bar 6, on the switch to A, I instead opt to play a single-note melodic line based on A major pentatonic, and in bars 7 and 8 I return to E and navigate through harmonized note pairs in E major pentatonic in a similar manner. Let’s say the chords in the progression change more frequently: in FIGURE 5, I play two beats of E then two beats of C, followed by a full bar (four beats) of A. Once you have these shapes down, experiment with the myriad of ways in which one can weave interesting rhythm parts based on the techniques illustrated here.