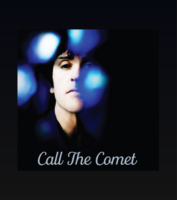 The new album—Marr’s third solo effort—is set for a June 15 release via New Voodoo. You can listen to the album’s first single, “The Tracers,” and check out its tracklist below.

“Call The Comet is my own magic realism,” Marr told NME about the album. “It’s set in the not-too-distant future and is mostly concerned with the idea of an alternative society. The characters in the songs are searching for a new idealism, although there are some personal songs in there too. It’s something that people like me can relate to.”

You can preorder Call the Comet right here.