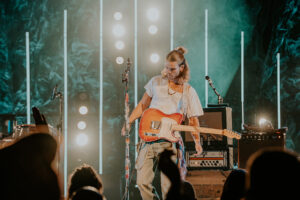 Orange Amplification is delighted to welcome JJ Julius Son, frontman and guitarist with the worldwide phenomenon Kaleo, as an ambassador for the company.

Kaleo are one of Iceland’s biggest musical exports. Their breakthrough album, A/B, took their music around the globe with its three hit singles, the Grammy-nominated No Good, All The Pretty Girls and the chart-topping Way Down We Go, which have featured in more than twenty hit TV shows including Suits, Orange Is The New Black and Grey’s Anatomy. The band’s Fight Or Flight tour, supporting the release of their critically acclaimed third album, Surface Sounds, has taken them across the USA, including appearances at Coachella, and seen them opening for the Rolling Stones in Europe.

Jökull Júlíusson, better known as JJ Julius Son, is the frontman and guitarist for Kaleo. As the primary writer for the band, as well as lead singer, guitarist and pianist, he leads the blues-driven group with passion and musical skill. Demonstrating a wide range of musical genres and influences, the diversity of JJ’s music moves from cinematic, classic rock through soft, folksy blues, into hard-hitting stomp rock. JJ appeals to a mainstream audience with his grungy guitar riffs, crying leads and electrifying performances.

JJ Julius Son uses an Orange AD30 on tour, in the studio and at home. Speaking about the amp, he said ‘the Orange AD30 is the only amp I’ve found that can handle the wide variety of tones and instruments that I use in a single show’.

The Orange AD30 is a one-stop shop for all shades of pure British chime and crunch. From shimmering cleans, edge-of-break-up jangle or fire-splitting classic crunch, this amp has it all, in a simple, road-proven package.

Check out orangeamps.com for an interview with JJ Julius Son coming soon.