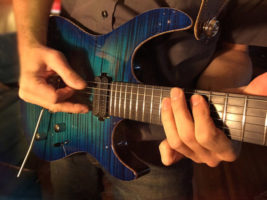 Learn How to Properly Execute a Pull Off

The pull off is one of rock guitar’s most oft-used techniques, and for good reason. They simply sound awesome.

Pull offs allow guitarists to play two or more notes with just one pick. In its most basic sense, a pull-off is executed by striking the string and, while the note is ringing, releasing the fretting finger which allows the next note—an open string or note a finger further down the neck is holding—to sound. Everyone has used this technique from Eric (Clapton or Johnson) to Jim (Hendrix, Page, and Reed) to Steve (Morse, Vai, Miller, Ray Vaughan, Lukather, Howe, Stevens…you get the idea).

The term pull off is attributed to Pete Seeger. Seeger wrote and performed, among other famous folk songs, “Where Have All the Flowers Gone” “If I Had a Hammer” and “Turn! Turn! Turn!” which was later covered and popularized by The Byrds. But while Seeger may have received credit for coining the phrase “pull off,” the technique was in existence long before he, or the banjo for that matter, existed.

Sometime during the late 18th Century, composers using bowed instruments were facing a dilemma. When they played “pizzicato”—which literally means “to pluck” the strings—they had to put down, or at least shift the position of their bow so their right hand would be free to pluck the appropriate notes. As you can imagine this is much more difficult than moving a pick into the cup of your hand before doing some shred-tacular tapping. Musicians needed a pause to switch from their bowing hand into the proper pizzicato position. Enter the pull-off- or, in classical terms- what is known as “lefthanded pizzicato.” Instead of plucking strings with their right hand, musicians could now pull off the string with their left-hand, which meant they could still hold onto their bows. It also meant string players could play a plucked note immediately following a bowed note and, in doing so, create some pretty tasty licks. The godfather of shred himself, Niccolo Paganini, made good use of this technique in his violin masterpiece, 24 Caprice. And over 150 years later, Steve Vai made good use of this technique playing “Eugene’s Trick Bag,” which itself was inspired by another Paganini tune, Caprice No. 5.